All papers reported that the Lower House on Monday approved the GOJ-sponsored FY2017 budget bills at its plenary session, noting that the legislation will be enacted by the end of March without fail even if the Upper House fails to take final action due to a constitutional clause. Pointing out that the House of Councillors will start deliberations on the legislation today and that it will be the first time in 18 years for the chamber to begin debate on the next fiscal year’s budget in February, the dailies said the Abe administration and the ruling coalition have been successful in moving forward the budget legislation despite fierce debate on a number of thorny issues, such as the Moritomo Gakuen scandal involving Prime Minister Abe and his wife, the controversial conspiracy legislation, and the uproar over the discovery of daily reports filed by SDF peacekeepers in South Sudan. The papers predicted, however, that the opposition will grill the prime minister over these items during the Upper House deliberations. 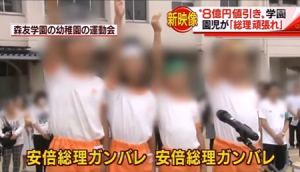 As for the Moritomo scandal, Asahi and Mainichi reported on a video showing pupils of a kindergarten operated by Morimoto Gauken chanting nationalist slogans during a sports event in 2015. They shouted that China and South Korea should “repent and not treat Japan as a villain” and praised Prime Minister Abe for passing the security legislation, saying, “Go Prime Minister Abe! Go Prime Minister Abe!” Asked by an opposition lawmaker to comment on the footage during yesterday’s Diet session, the premier said, “I don’t think it’s appropriate.”