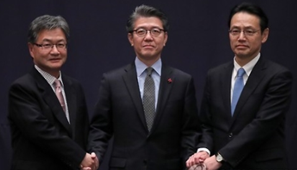 Nikkei reported from Washington on a meeting on Monday of the chief representatives to the Six-Party Talks from the U.S., Japan, and South Korea at which they exchanged views on the latest developments related to North Korea, including the recent test launch of a ballistic missile and the assassination of Kim Jong Nam in Malaysia. They also apparently discussed the possibility of the U.S. reinstating North Korea on its list of state sponsors of terrorism.