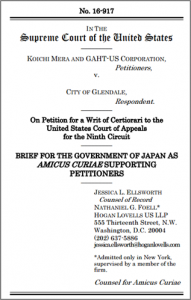 Several papers wrote that MOFA has submitted to the U.S. Supreme Court a written opinion arguing that the court should accept an appeal filed by a group of Japanese living in California calling for the dismissal of a lower federal court ruling upholding the decision by the City of Glendale to build a comfort woman statue at a public park. In an “amicus curiae brief,” the Japanese ministry reportedly claimed that the comfort woman memorial “interferes with and disrupts U.S. foreign policy.” The GOJ apparently submitted the document to prevent the installation of similar statues in the U.S. Asahi projected, however, that the GOJ document will have little impact on the case since the U.S. Supreme Court rarely grants appeals.