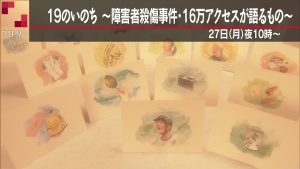 NHK’s “Close-up Gendai Plus” reported on the incident in which a former employee of a facility for people with intellectual disabilities murdered 19 residents there last July, claiming that people with disabilities only create unhappiness. NHK set up a special site to honor the 19 victims, whose names have not been disclosed, introducing each victim with pictures and comments. The program said the site has already been accessed 160,000 times, adding that many viewers have posted messages expressing sympathy for the families as well as outrage and grief over the shocking incident.