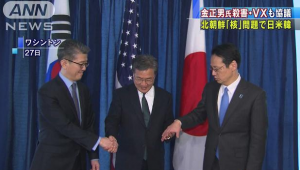 TBS and TV Asahi reported that the top nuclear envoys of the U.S., Japan, and South Korea met in Washington on Monday and exchanged views on the murder of Kim Jong Nam. TV Asahi quoted MOFA Asian and Oceanian Affairs Bureau chief Kanasugi as telling reporters: “We exchanged views from the viewpoint of how the murder of Kim Jong Nam will impact the North Korean situation in the future. The VX nerve agent is a new issue, and the U.S. view toward North Korea appears to be more severe than ever.” The network said this was the first meeting between the chief delegates to the Six-Party talks under the Trump administration, adding that the three officials agreed on trilateral cooperation to urge North Korea to stop its nuclear and missile development. They also reportedly agreed that it is important for China to thoroughly implement the sanctions against North Korea, and exchanged views on the impact of the murder of Kim Jong Nam on the China-DPRK relationship.