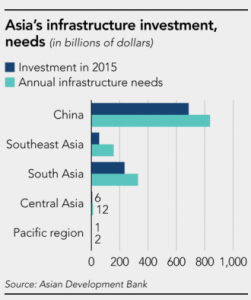 MANILA — Asia will need $26 trillion of infrastructure investment in the 15 years from 2016 to 2030, said a report published on Tuesday by the Asian Development Bank.

According to the report, titled Meeting Asia’s Infrastructure Needs, the region needs electricity supply chains to deliver power to the 400 million people who still live without electricity.

Infrastructure investment in Asia currently meets only about half the demand. Aid from development agencies, such as the ADB, remains a mere 2.5% of total investment. The report calls on regional economies to provide financing through fiscal measures and to make use of private-sector money.

The report covered 45 countries and territories including China and India. To sustain the current level of economic growth, Asia needs $26 trillion over the 15-year period.

In the previous report, released in 2009, the ADB estimated that Asia would need $8 trillion of infrastructure investment between 2010 and 2020.

On an annual basis, estimated demand has more than doubled from the $750 billion in the previous estimate to over $1.7 trillion. The rise is due to continued economic growth boosting infrastructure demand, the report said.

Estimates also rose because the latest report included projections for investment needs to respond to climate change and coverage was expanded from 32 regional economies to all of the developing economies that make up the bank’s membership.

By region, 61% of demand is expected to come from East Asia, which needs investment in transportation and communications in addition to electricity.

In terms of the ratio of infrastructure demand as a share of gross domestic product, Pacific countries had the highest rates, such as Fiji at 9.1%. Countries like Vanuatu and Tuvalu, which have seen the effects of rising sea levels, need investment to improve roads and other infrastructure, the report pointed out.

Among the 25 major countries that are home to 96% of the people covered by the report, the amount of investment currently stands at an estimated $881 billion annually, about half the demand. The gap between projected demand and actual investment in those 25 countries over the five years from 2016 to 2020 is expected to equal 2.4% of estimated GDP over the same period. Without China, the remaining 24 countries would need to invest an additional amount equivalent to just over 5% of their collective GDP to meet demand.

In 2015, the ADB and other international development institutions provided some 2.5% of the infrastructure investment in the region. The ADB spent $10 billion, the World Bank provided $6.6 billion and the International Finance Corp. offered $3.2 billion.

Although the China-led Asian Infrastructure Investment Bank joined in 2016, it loaned only $1.7 billion in its first year. Boosting lending by those institutions alone would make it difficult to meet demand.

The ADB suggested that it would be possible to generate funds to fill 40% of the shortfall for the 24 countries not-including China if each economy pushes fiscal reforms to increase infrastructure spending. The remaining 60% can be supplied by the private sector tripling spending from around $63 billion a year today to $250 billion annually between 2016 and 2020.

It is essential to use private-sector money to solve infrastructure shortages, ADB President Takehiko Nakao said. The bank hopes to encourage member economies to increase investment and reform regulations so as to attract public-private infrastructure projects, he said.