New U.S.-Japan economic dialogue to be held in mid-April 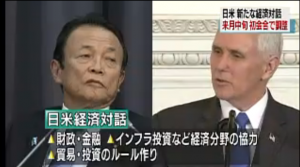 NHK reported this afternoon that Finance Minister Aso said during a meeting of the Upper House Budget Committee today that Japan is making arrangements with the U.S. side to hold the first meeting of the new U.S.-Japan economic dialogue in mid-April when Vice President Pence visits Japan at the invitation of a private group. The network said while the U.S. and Japan are expected to discuss economic cooperation, U.S.-Japan trade, and investment rule-making at the new economic dialogue, it is uncertain how much the two sides will be able to discuss since major high-ranking officials of the Trump administration have yet to be confirmed by Congress.