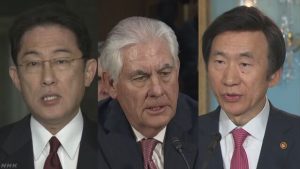 NHK reported online that Foreign Minister Kishida held separate phone conversations with Secretary of State Tillerson and ROK Foreign Minister Yun this morning in response to North Korea’s launch of four ballistic missiles this morning. Kishida told reporters afterward that he expressed Japan’s position that it can’t approve of the missile launch that was a clear provocation to the region and the international community. Kishida added that he confirmed with his U.S. and ROK counterparts that the three nations will express their firm positions on the DPRK and strongly demand Pyongyang not conduct further provocations but to abide by UNSC resolutions. Kishida also said that he agreed with Secretary Tillerson to seek a strong UNSC message condemning Pyongyang.

In its noon news, NHK reported that North Korea fired four ballistic missiles at around 7:34 a.m. today, saying that three of them landed within Japan’s exclusive economic zone (EEZ). Prime Minister Abe told an Upper House Budget Committee session this morning that the launch, which clearly shows that the level of threat posed by North Korea has entered a new stage, is a serious provocation to Japan’s security. The premier added that the launch, which clearly violated UNSC resolutions, was totally unacceptable and that Japan has lodged a strong protest with Pyongyang.

According to the Ministry of Defense, the missiles, which were fired from the western city of Tongchang-ri, flew some 1,000 km at an altitude of about 270 km and fell into waters about 300 to 350 km west of the Oga Peninsula in Akita Prefecture about 10 minutes after they were launched. There have been no reports of damage to ships or aircraft in the area.

A report from Washington said that the Trump administration apparently takes North Korea’s escalating provocations seriously. The network said that Secretary of State Tillerson will probably discuss with his counterparts in Japan, South Korea, and China how to deal with Pyongyang during his envisaged visits to these three nations later this month.

The network also reported that Secretary General Yachi of the National Security Secretariat spoke by phone with National Security Advisor McMaster today and agreed that the U.S. and Japan will continue their close cooperation against provocations by North Korea. According to NHK, McMaster told Yachi that President Trump has expressed his clear support for Prime Minister Abe’s position on North Korea.

In addition, MOFA Asian and Oceanian Affairs Bureau Director General Kanasugi spoke by phone with Special Representative for North Korea Policy Joseph Yun this morning and agreed that they will closely coordinate bilaterally as well as multilaterally with South Korea and the United Nations to urge North Korea not to conduct any further provocations.

Takushoku University Professor Hideshi Takesada told the network that North Korea probably fired the missiles at this juncture out of strong concern over the joint military exercise between the U.S. and the ROK that began on March 1 and in an effort to deflect international criticism from Pyongyang’s alleged involvement in the murder of Kim Jong Nam.