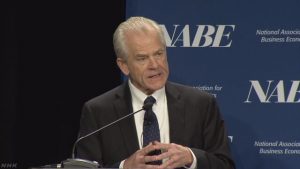 NHK reported on its website that White House National Trade Council Director Navarro delivered a speech on Monday in Washington during which he stressed the need for the U.S. to reduce its huge trade deficits with Japan, China, Germany, Mexico, and other nations. With Japan’s auto market in mind, Navarro reportedly pointed out that Japan has “high non-tariff barriers” and stressed the need for corrective action through concluding a bilateral trade agreement with Japan. The network added that the Trump administration is expected to pursue a hardline trade policy led by Navarro in order to reduce the U.S. trade deficit.