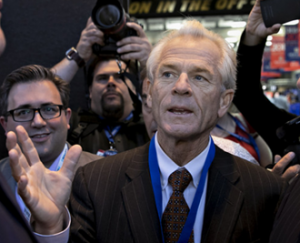 NHK reported this morning that White House National Trade Council Director Navarro said in an interview with the Wall Street Journal on Wednesday that he will ask Japan to eliminate tariffs and non-trade barriers and buy U.S. products. He reportedly said: “Any country we have a significant trade deficit with needs to work with us on a product-by-product and sector-by-sector-level to reduce that deficit over a specified period of time.” Navarro reportedly named Japan and Germany, and stressed that he will urge them to buy U.S.-made products by saying: “Our trade deficit will be reduced if our trade partners buy a large amount of American corn or aircraft.” The network said U.S. pressure on Japan to expand the purchase of American products is expected to increase in the future.