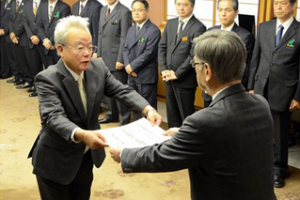 Asahi reported that Moritake Tomikawa, former President of Okinawa International University, officially assumed the post of vice governor in Okinawa on Thursday, noting that he will be responsible for base issues. Although his predecessor Ageda was reportedly good at conducting behind-the-scenes negotiations with the central government over Futenma relocation and other U.S. base issues, doubts remain among some prefectural officials over whether the new vice governor can do the same. Tomikawa told the press yesterday: “I am fully aware of the difficulty of the post. I’d like to find solutions while exchanging opinions [with the central government].” The daily said former Kin Mayor Katsuhiro Yoshida will be appointed as “policy coordinator” in charge of liaising with the Abe administration.