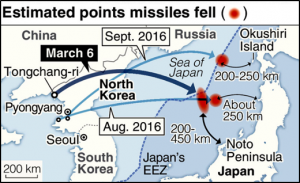 Yomiuri and Sankei reported on the GOJ’s disclosure on Thursday that one of the projectiles that the DPRK launched on Monday landed in Japan’s EEZ some 200 kilometers north of the Noto Peninsula in Ishikawa Prefecture, saying that the impact point was the closest ever to the Japanese territory. Chief Cabinet Secretary Suga told the press yesterday that the four missiles appeared to be Scud ERs, underscoring that DPRK missiles are becoming a “real threat,” as they cover western Japan.

In a related piece, Asahi and Nikkei wrote that a yawning gap remains between China and the U.S.-Japan-ROK bloc over pressure on North Korea, noting that although the four nations were in sync in issuing a UN Security Council press statement condemning the latest missile firing, the two camps were at odds over potential additional steps to deter further provocations. Asahi said Beijing is hesitant to step up pressure on its defiant neighbor and instead is urging the U.S. and South Korea to suspend an ongoing bilateral exercise to deescalate the tension.