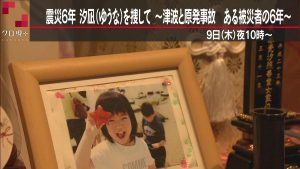 NHK’s “Close-up Gendai Plus” reported on a Fukushima man who lost his wife, parents, and one of his daughters in the tsunami in 2011. Although the bodies of his wife and parents were soon found, his daughter remains missing nearly six years after the natural disaster. His house is located in an area that has been off limits ever since because of its proximity to the Fukushima Daiichi NPP. The program said the man searched for his daughter whenever former residents were allowed access to the area, adding that with the help of the government, some body parts belonging to his daughter were found late last year. The program has reported on him for nearly six years, saying that his search has become a healing process for him.