Reconstruction Agency fails to lead due to Kasumigaseki turf war

By Noriyoshi Otsuki and Tatsuyuki Kobori

Five years have passed since the Reconstruction Agency (RA) was founded after the Great East Japan Earthquake. It has been coordinating between various ministries for the reconstruction of housing and roads as the “command center,” but there has been infighting within Kasumigaseki over the budget and responsibility of the Fukushima nuclear power plant accident and subsequent decontamination work. The agency has four more years of life until it is abolished by law. 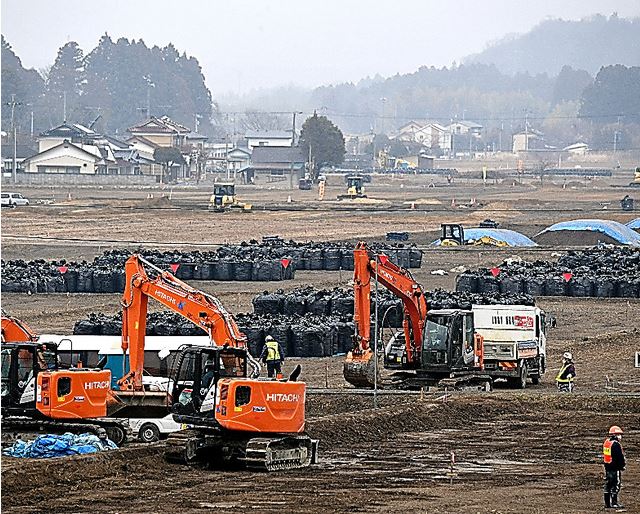 “[We] want to take over the decontamination work and interim storage facility,” said Reconstruction Minister Wataru Takeshita to Environment Minister (MOE) Yoshio Mochizuki in Septermber 2014. Prime Minister Shinzo Abe ordered Takeshita to “lead the overall recovery effort from the nuclear accident.” Back then, the decontamination work and land acquisition for the temporary storage facility to store waste, both of which were led by MOE, were delayed.

Decontamination was mainly civil engineering work, involving the removal of superficial soil. Many working in the RA were former Ministry of Land, Infrastructure, Transport, and Tourism (MLIT) staffers who had plenty of experience in negotiating land deals. “MOE can’t handle [the decontamination], have either RA or MLIT manage it,” requested then Fukushima Governor Yuhei Sato, behind the scenes.

According to Takeshita, however, “MOE’s working level staffers rejected our requests,” despite getting Mochizuki to side with him.

It is said that MOE took on the decontamination work because Vice Minister Hideki Minamikawa was actively engaged in establishing environmental protection measures before the accident. Circumstances within the ministries had an impact as well. “Although [MOE] was demoted from an Agency to a Ministry during the reorganization of government ministries and agencies, it still got a Vice Minister from the Finance Ministry (MOF). The decontamination work gave us an opportunity to show our presence,” stated a former MOE official. It also helped that MLIT shied away from handling radioactive contaminated soil.

Although MOE grew larger, progress remained slow, despite the budget and personnel size increasing five- and 1.2-fold, respectively, in fiscal 2012 at the height of decontamination. The government considered transferring the decontamination and temporary storage work to the RA, but MOE resisted by establishing liaison and coordination headquarters within the ministry.

Besides the restricted areas unfit for evacuees’ return, the decontamination will finally be completed this spring, resulting in a three-year delay from the initial plan. Only 20% of the necessary land has been secured to build a temporary storage site.

There have been several clashes with the Ministry of Economy, Trade and Industry (METI) as well. In 2012, it was suggested that the Cabinet Office’s “Support Team for Residents Affected by the Nuclear Power Incident” be housed in the same Asakasa building as the RA. The team was to be comprised of former METI staffers, who would cooperate with the Fukushima local government to issue and remove evacuation orders.

METI: “It would be faster to convince the locals if we joined forces with the RA. We wouldn’t mind if the RA took over the team.”

RA: “The Fukushima accident is METI’s responsibility within Kasumigaseki. Don’t force it on us.”

The team ended up sharing the building with the RA, but the two organizations remain independent. Their cooperative relationship remains weak.

There was bickering between METI and RA over the Innovation Coast Initiative to attract industries near the Fukushima power plants; METI who wanted to spend the reconstruction budget (total of 32 trillion yen) and RA who did not.

MOF agreed with METI’s claim that the initiative will create jobs for the returning evacuees, and approved the reconstruction budget spending. However, the budget was used to not only create employment through the development of decommissioning robot-testing facilities and fuel- melting labs, but also to support Tokyo Electric Power Company (TEPCO) with its nuclear facilities’ decommissioning work. The reconstruction budget will also be used to decontaminate the no entry zones from fiscal 2017 to rescue TEPCO.

Most of the orders for evacuation of areas near the power plants will be lifted soon. When they are, the reconstruction effort will center on reviving Fukushima. Regardless of the infighting at Kasumigaseki, the RA’s greatest mission cannot be accomplished unless evacuees are returned to their homes.