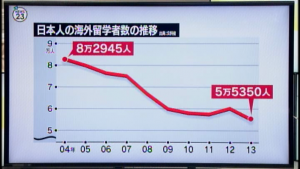 “News 23,” TBS’s weekday evening news show, aired an eight-minute report on the decline in the number of Japanese students studying abroad. According to Education Ministry statistics, the number had dropped to 55,350 in 2013 from 82,945 in 2004. The network said that the Japanese government is concerned that young Japanese are becoming inward-looking. The government has set a goal of increasing the number of schools adopting the International Baccalaureate (IB) Diploma Program to 200 in 2020 from the current 42 to bolster English education in Japan to increase the number of Japanese who can play active roles globally. The program highlighted Tamagawa Academy in Tokyo, one of the IB schools, quoting one of its students as saying that the IB program is challenging but beneficial for him.