Kishida and the LDP’s euphoria

The Liberal Democratic Party (LDP) gathered for its fifth party convention since returning to power. The event was a great success.

Held in Grand Prince Hotel New Takanawa on March 5, the LDP’s 84th party convention was packed; some participants were even unable to find seats. Prime Minister Shinzo Abe’s trips to various parts of the world were projected on a screen to play up his efforts to promote “diplomacy that takes a panoramic perspective of the world map.”

The climax of the event should have been the revision of the party’s bylaws to allow the LDP president to serve “up to three consecutive terms,” a change from the current rule of “two consecutive terms,” but Secretary-General Toshihiro Nikai read out the decision in a monotone voice. The moment had absolutely no drama. He “reported” this along with the number of seats the LDP holds in the houses of the Diet. The change to the bylaws was approved with a clapping of hands.

The decision had already been made in fact. But the party convention, the highest decision-making body, approved the matter in a surprisingly subdued fashion. A sense of euphoria wafted over party members there, who firmly believe their reign will last forever.

This explains why Abe cautioned against self-complacency in his speech at the party convention while stressing the party’s “fifth year in power.”

Contrary to this, there was an LDP politician who emphasized the same “fifth year” during a debate program held at United Nations University in Tokyo’s Aoyama district a day before the party convention. 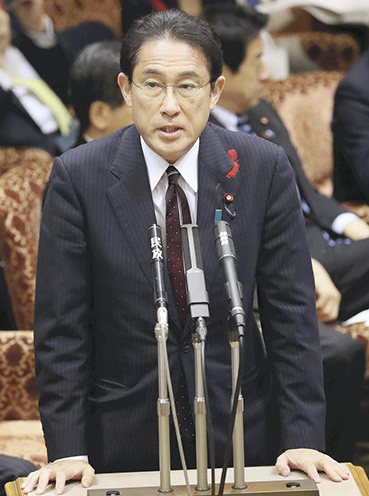 Keeping in mind the rising populism in Europe and the inauguration of U.S. President Donald Trump, Foreign Minister Fumio Kishida, who may soon become the longest-serving postwar foreign minister, warned that “people tend to go to extremes in precarious times” and stressed that he “would like to pursue a strategic and well-balanced foreign policy as a foreign minister who is serving his fifth year in office.”

Kishida is not an orator, however. His speeches do not inspire. His “I want to do this” vision gets lost as he concentrates on maintaining a good balance.

This is probably the reason Kishida’s leadership in foreign policy is overshadowed by that of the Prime Minister’s Office [Kantei] in promoting a “diplomacy that takes a panoramic perspective of the world map.”

Kishida is also poor at playing up his accomplishments.

Kishida should receive credit for concluding the “final agreement” [with South Korea] over the comfort women issue at the end of 2015 and for realizing U.S. President Barack Obama’s visit to Hiroshima in May 2016, but his popularity rapidly waned with the eruption of political disarray in South Korea and Abe’s visit to Pearl Harbor. Some observers say that he miscalculated in not declining a request to join the cabinet.

In the “post-Abe” race, Kishida trails former Secretary-General Shigeru Ishiba. A poll also shows that he trails Democratic Party leader Renho among politicians who the public expect to be the next prime minister.

Ishiba ran for the LDP presidency when he was not affiliated with any of the party factions. In contrast, Kishida gives the impression of not being a go-getter. Though he leads a faction, he has never run in the presidential race. This is reflected in the public’s low expectations for him.

If Abe is reelected to the LDP presidency and completes his third three-year term, the crucial moment for Kishida will come in the autumn of 2021.

If Kishida sits and waits patiently, will he be able to succeed Abe? There is no guarantee. Given that his policy principles are different from Abe’s, he should be prepared that the opposite may happen.

Kishida has little charisma and is not adept at political maneuvering, so he has little choice but to rely on his faction.

Kishida’s Kochikai is larger than the “Suigetsukai” led by Ishiba. Neither the “Ikokai” led by Deputy Prime Minister and Finance Minister Taro Aso nor “Shisuikai” led by Nikai have promising candidates. Even if a smooth transfer of power cannot be expected, Kishida has some advantages.

But this scenario will not prove successful if Shinjiro Koizumi, who will turn 39 in 2021, considers running for the party leadership.

His father, former Prime Minister Junichiro Koizumi, and Abe hail from the “Seiwa Seisaku Kenkyukai (Hosoda faction).” If Abe seizes control of the largest faction in the LDP and backs Shinjiro, Kishida will lose his advantage.

Kishida might foresee this scenario. He has been busy broadening his faction’s membership of late.

The rising realignment movement among the LDP factions is not aimed at blocking Abe’s reelection to a third term. It is spreading as preparation in case Abe falls from the height of power before the autumn of 2021. In particular, a “grand Kochikai vision” is expected to help Kishida solidify his foothold if realized.

The Kochikai split into the Kono group, the predecessor of the Aso faction, when former Secretary-General Koichi Kato succeeded former Prime Minister Kiichi Miyazawa as faction leader in 1998. Following the eruption of “Kato’s revolt,” in which Kato rebelled against the cabinet led by Yoshiro Mori in 2000, it again broke up into the Horiuchi faction (present-day Kishida faction) and Kato faction (present-day Tanigaki faction).

If the Kochikai, which has long been home to LDP liberals, is reunited, the LDP will be able to resurrect the “1955 regime,” under which it established one-party rule by broadening the scope of policy and flexibly changing course to accommodate public opinion.

It is ironic that the merger of some Tanigaki group members and the Aso faction is already underway. It is clear from the history of the Kochikai’s breakup that the two factions are at opposite ends from each other. This is probably the reason why some people in the Kishida faction worry that they may be “kicked out [of the Kochikai] once they invite other factions to join them. Kishida’s political style of excessive caution is creating this side effect.

This political approach may prove effective as long as there is a lull in the political situation and the whole LDP indulges in euphoria. But just like a transfer of power, there is no guarantee.

It might be too late to expect Kishida, who will turn 60 in July, to change. But it would be even better if he showed he has the courage to take risks.