Can Japan avoid trade conflict with the U.S.? [Part 2]

The U.S. administration that came into power in January is ramping up protectionist trade measures. It declared the immediate withdrawal from the TPP and renegotiation of NAFTA soon after it took office. Moreover, it has criticized its trading partners for its trade deficit and repeatedly mentioned imposing high tariffs to correct the trade imbalance. 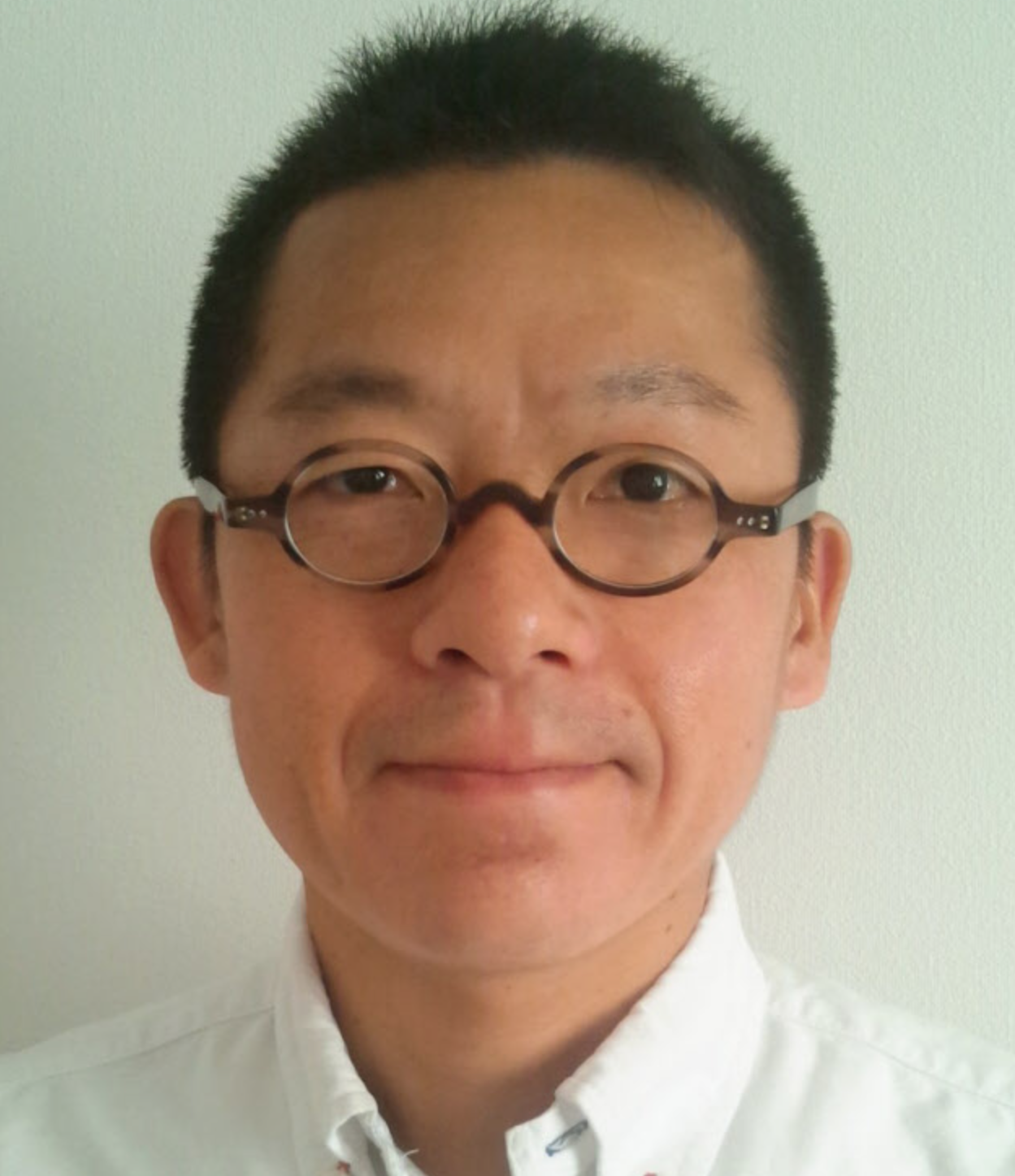 Behind these words and actions is the intention to protect  U.S. domestic industry from international competition. However, many are pointing out that the American protectionist trade policies may cause confusion in the global economy.

Why would a country protecting its industries from international competition cause confusion elsewhere in the first place? I would like to address this question here and explain the effects of protectionist trade based on economic conceptions.

As a thought experiment, imagine a country without tariffs starting to impose tariffs to curb trade. Theoretically, there are three possible effects from protectionist trade.

First of all, domestic producers can maintain their production. Local producers can avoid tough foreign competition through tariffs. Therefore, there are beneficial outcomes for producers.

Secondly, tariffs generate revenue. Prior to restricting trade with tariffs, this country had no tariffs, so it had zero tariff revenue. However, so long as imports continue once tariffs are put in place, this nation would earn tariff revenue. Therefore, countries that restrict trade have the benefit of earning customs revenue.

Thirdly, the protected products’ value would increase. In connection with the first effect of maintaining domestic production, prices will rise through tariffs. It is the consumers who will be hit with the cost of the price hike, so this is a negative outcome for the consumers.

Generally, the negative effect on consumers outweighs the positive effects of tariff revenue for producers and governments. Let’s look at the Japanese automotive industry as an example.

The auto industry is very significant in Japan. It employs a great number of workers, including workers in all the related industries involved in automotive manufacturing and marketing. However, the number of car owners exceeds the number of automotive workers. If the Japanese auto industry were to be protected with tariffs, the loss to consumers from price hikes would greatly exceed the benefits to automakers and the benefit in the form of increased tax revenue. Even if all of the tariff revenue and benefits enjoyed by the manufacturers were passed on to consumers, this would still be a net loss for Japan.

With an ever-expanding global value chain among companies, there are increasing cases when a domestic firm’s overseas subsidiary is involved in foreign exports. If imports were restricted with tariffs in these cases, it would limit the domestic parent company’s ability to procure parts or products from foreign subsidiaries, thereby producing negative outcomes to both domestic manufacturers and consumers.

This logic applies to not only to tariffs but also import restrictions, export subsidies, and other protectionist trade policies. For these reasons, protectionism is regarded as problematic.

Now, let’s consider whether protectionism would remain problematic if the positive effects of tariff income and the benefits to producers outweighed the negative effects to consumers.

It must not be forgotten that there are always trade partners in trade, and that these partners have the ability to retaliate. If one country slapped a high tariff on a trading partner’s imports, the partner will likely repay in kind,  the prices of both parties’ imports would rise and overall trade volume would contract. The more tariffs are raised, the bigger the trade reductions.

History has shown that what starts as a trade conflict could lead to an all-out war.

In 1929, after the Great Depression, the American government raised import tariffs to protect domestic producers that compete with imports. In response, many countries did the same, radically shrinking global trade, thereby exacerbating the worldwide depression. This cut back in trade divided the world economy in blocks, and the tariff war among regionalized economies developed into WWII.

This current trend towards protectionism is triggering deep international concern that it may be aggravating global trade friction. That in itself has become a factor contributing to the current confusion surrounding trade.

Another important point on trade is that one country’s trade balance deficit is not necessarily a trade concern. To simplify matters, let’s say that trade balance and current-account balance are one and the same; trade balance being the subtraction of imports from exports. When regarding GDP from the point of view of overall economic spending, it can be said that GDP = consumption + investment + government spending + export – import.

This means that if government spending exceeds tax revenues, as in the recent U.S. case, unless domestic savings exceed the fiscal deficit, the trade balance will inevitably end up in the red. Moreover, trade policies do not affect trade balance, as they do not influence domestic savings or investments. Therefore, looking at one country as a whole, a trade deficit is not a concern over trade; it is an issue over domestic savings and investment, including those by the government.

Furthermore, even if there is a trade balance deficit between two countries, it should not be treated as a trade issue. As was pointed out in the article on Trump’s trade policies in the Nikkei on Jan. 21, it is only natural that the bilateral trade balance between states would end up with one with a surplus or deficit when the two nations’ industrial structures and resources differ. 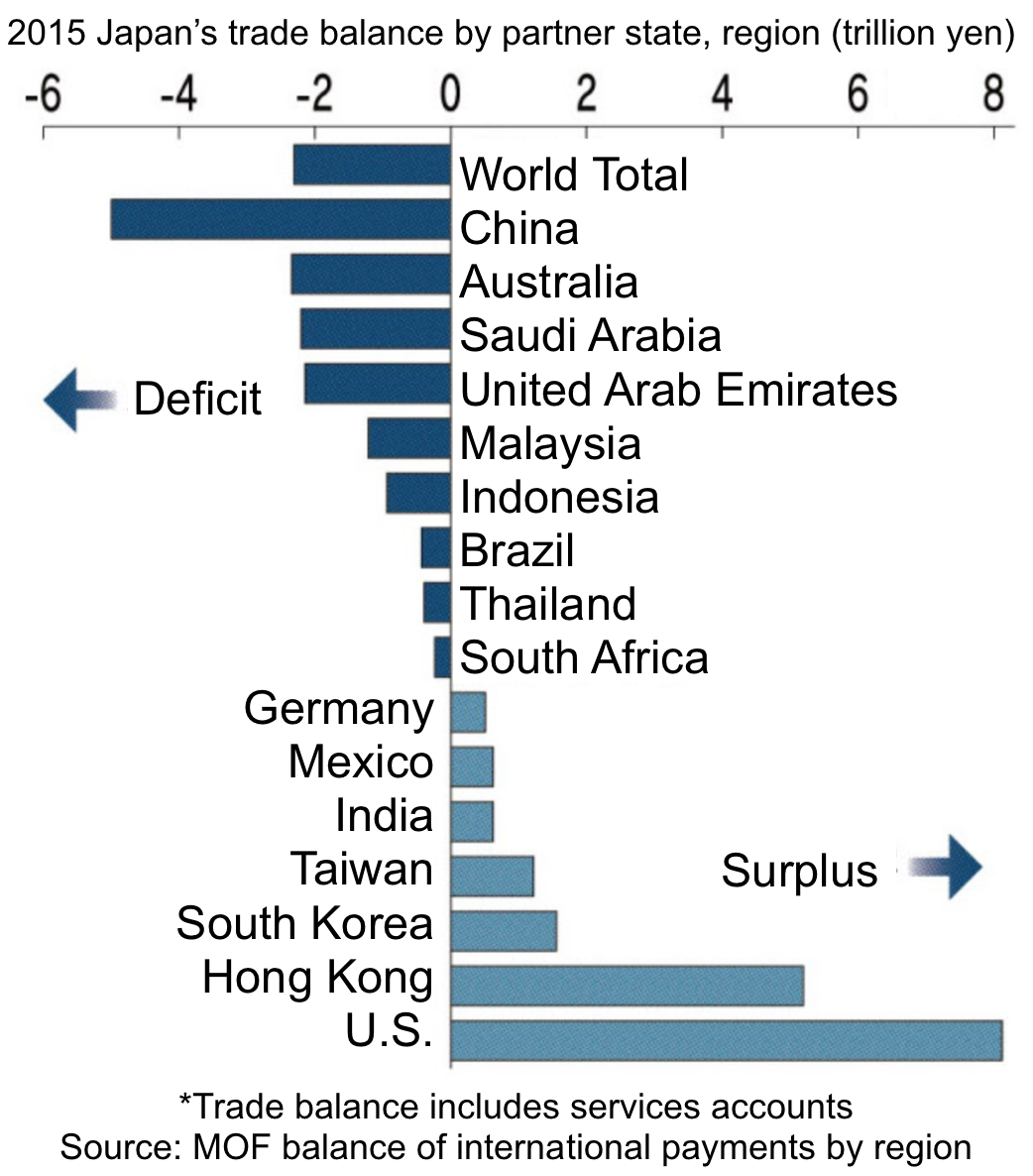 The graph shows Japan’s trade balance by partner state and region. You will notice that it has a large trade deficit with oil producers in the Middle East. Japan, poor in natural resources, has always imported primary resources to manufacture and export industrial products. That is why it has always had a trade deficit with resource-rich trading partners.

Has Japan felt that this trade imbalance is unfair? Has it demanded that oil-producing nations import more Japan-made products or limited oil imports? The answers is no. From this perspective, it is clear that trade imbalances between trading nations should not to be mistaken as a trade issue.

It has been exactly 200 years since the British economist David Ricardo formulated his idea of comparative advantage in 1817. I can’t help but wonder what he would think if he learned that there was a trend toward restricting trade 200 years later. They say “history repeats itself,” but some history should not be repeated.

Needless to say, careful considerations are needed to figure out how to best redistribute the benefits reaped from trade and adjust costs after liberalizing trade. We must all reacquaint ourselves with the basic notion that trade is not a zero-sum but a plus-sum concept.