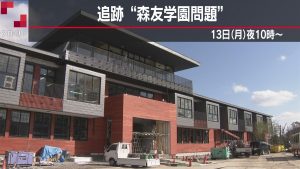 NHK’s “Close-up Gendai Plus” reported on the scandal involving school operator Moritomo Gakuen, saying that its new elementary school was originally approved by the Osaka Prefectural Government despite various problems, including not having secured the land. The program reported that many people were impressed by the education policy of Moritomo Gakuen President Kagoike, adding that he utilized his personal network with politicians to obtain government approval for the new school.