Japanese high school students are more passive about learning and less ambitious about their future than their counterparts in the U.S., China, and South Korea, according to the findings announced on March 13 of a four-nation poll conducted by the National Institute for Youth Education. An expert has commented that the survey results may be related to the nature of classes at Japan’s high schools.

The survey was conducted from September through November 2016 targeting high school students in the four countries and asked them about their school life and how they go about their studies. Valid responses were received from a total of 7,854 students.

When asked how they study (multiple responses permitted), 12.3% of Japanese students said they “think critically, ask questions, and look into issues.” Although that figure is higher than that for South Korea (10.4%), it is substantially lower than the figures for the United States (34.5%) and China (52.7%).

Only 7.5% of Japanese youth said they “apply what they learned in class to other situations,” well below the 45.8% of American, 25.9% of Chinese, and 10.4% of South Korean high school students who said the same. Only 3.7% of Japanese students said they “actively express their opinions in class,” making Japan the lowest of the four countries in this category.

When asked how much they study on weekdays outside of school classes and homework (including cram schools), 24.2% of Japanese said they did no outside study, the highest of any country. Some 69.3% of Japanese said that they “cram before tests,” hinting at the large amount of “overnight cramming” students do.

Japanese students also appeared to be less ambitious about their future. The percentage of high schoolers saying they wanted very much “to become a leader” were as follows: United States, 50.8%; China, 24.7%; South Korea, 18.9%; Japan, 5.6%. Japanese saying they wanted to “have a high position in society” or wanted to “study at a famous university” were in the 13% range, falling below the percentages in the other countries surveyed.

Chiba Keiai Junior College President Yoichi Akashi, who led the survey, commented: “Japanese students’ passive attitude to learning may be impacted by the fact that few high school classes have students learn actively.” “Students’ attitude toward their studies likely results in low ambitions for the future,” he continued. 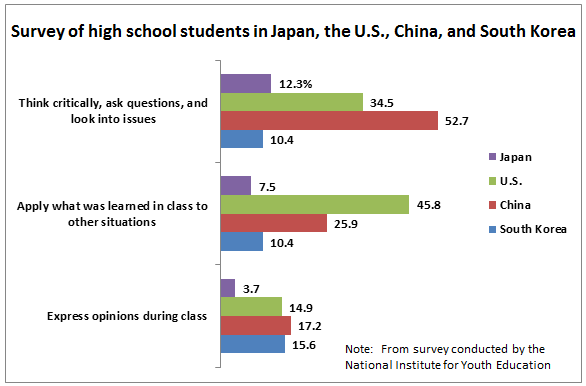