According to the nationwide telephone-based public opinion poll conducted by Kyodo News [on March 11–12], those opposed to a bill to revise the Act on Punishment of Organized Crimes to change the structural elements of conspiracy exceeded those in favor, marking a reversal from the January poll in which those in favor outnumbered those opposed. Among ruling party supporters, those in favor of the bill still exceed those opposed; however, support for the bill among LDP supporters and among Komeito supporters declined by 7.5 points and 8.7 points, respectively, from the January poll. The government has been pushing the importance of the legislative amendment to strengthen measures to combat terrorism; however, it does not seem that this has resulted in voter understanding.

By gender, more women than men took a harsh view of the bill. Some 43.9% of men were in favor of the bill while only 22.8% of women were behind it. Some 31.7% of women responded either “don’t know or no answer.” (Abridged) 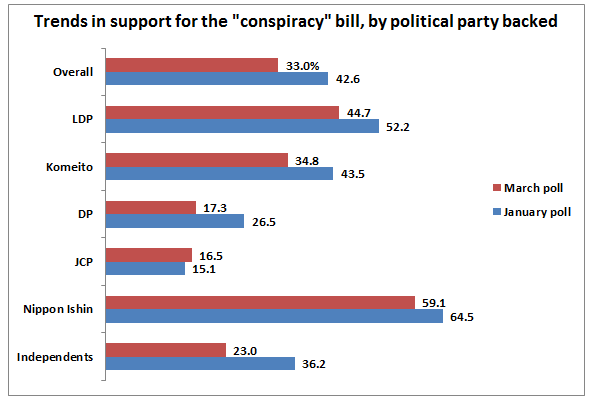