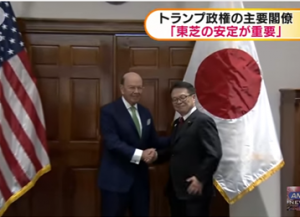 NHK reported this morning that visiting Minister of Economy, Trade and Industry Seko met with Secretary of Commerce Ross on Thursday in Washington. The network said the two ministers agreed to boost bilateral economic relations through creating rules for trade and investment in the Asia-Pacific region. The network said no specific requests were made at the meeting between Ross and Seko despite the fact that members of the Trump administration have recently been making tough remarks toward Japan, including President Trump urging senior officials of Toyota on Wednesday to build factories in the U.S. and USTR nominee Lighthizer expressing the view that Japan should be urged to review its tariffs on agricultural products. The network said, however, that since the U.S. side may urge Japan to take measures to reduce the U.S. trade deficit with Japan during the economic dialogue in April, Minister Seko is hoping to forge a good relationship with Secretary Ross, who is known to be pro-Japan. The network also said Secretary Ross talked about Toshiba and stressed the importance of stable management, adding that the two ministers agreed to closely share information on the matter.