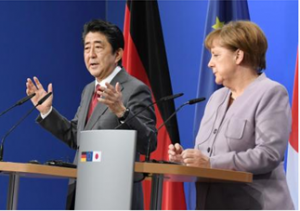 All Tuesday papers reported on a summit held on Sunday in Hanover, Germany, between Chancellor Merkel and visiting Prime Minister Abe, at which the two leaders pledged stronger leadership in promoting trade liberalization. Abe told local businessmen in a speech ahead of the meeting: “Along with Germany, Japan would like to promote an open trade system.” Abe and Merkel reiterated the two governments’ steadfast commitment to free trade in view of Brexit and the launch of the “protectionism-oriented” Trump administration. The two leaders also agreed to forge a Japan-EU EPA at an early date.

Mainichi said while Abe is anxious to help Europe mend ties with the Trump administration strained over immigration and trade in preparation for the G7 summit in Italy in May, the prospects for this diplomatic agenda are unclear since it will be difficult for some European leaders to extend overtures to the U.S. leader on account of strong domestic opposition.