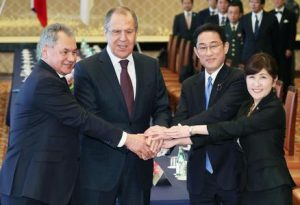 All Tuesday papers reported on a Japan-Russia 2+2 foreign and defense ministerial meeting held in Tokyo yesterday, during which the participants agreed to take a concerted approach in attempting to dissuade North Korea from continuing its nuclear and missile development. In the first meeting of its kind in almost 40 months, the two sides also agreed that Prime Minister Abe will visit Russia in late April for a summit with President Putin. The Russian ministers dismissed Japan’s objection to the deployment of a new military division on the Northern Territories. While Foreign Minister Kishida emphasized the significance of the meeting for deepening mutual confidence in the face of the increasingly harsh regional security situation, the papers said a considerable perception gap remained over the threat posed by the DPRK and China’s military rise. Yomiuri said Moscow agreed to resume the 2+2 dialogue with Tokyo with the goal of undermining G7 unity and the sanctions imposed after its annexation of Crimea in 2014.

In a related development, all Sunday papers reported on a Japan-Russia meeting on “joint economic activities” on the Northern Territories convened in Tokyo on Saturday, noting that Russian officials stressed that no economic activities will be possible unless they are conducted in accordance with Russian laws and rules. They thus dismissed a Japanese proposal for joint economic activities to be implemented under a “special system.” But, in a bid to showcase Tokyo’s eagerness to help Moscow improve the living conditions of the islanders with the ultimate goal of obtaining Russian concessions on the territorial front, the Japanese side put forward a range of ideas, including cruises to the islands and “remote medicine” for Russian residents.