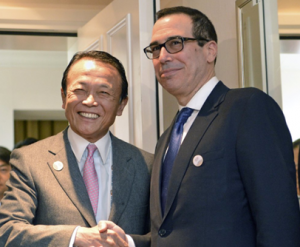 All Saturday morning papers reported from Baden-Baden, Germany, that Finance Minister Aso met with Treasury Secretary Mnuchin on Friday on the margins of the G20 conference, noting that the two officials shared the view that rapid fluctuation in the foreign exchange market undermines global economic stability. In their first bilateral meeting, the U.S. official also reportedly agreed with Aso on the importance of avoiding engaging in currency wars. The Secretary did not object to Aso’s insistence on the need to oppose protectionism.