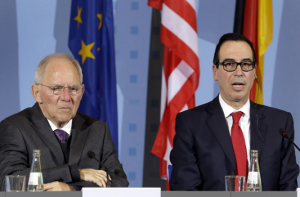 All Sunday and Monday papers reported extensively on the conclusion of the G20 financial ministers’ meeting in Baden-Baden, Germany, on Saturday, highlighting the conspicuous absence in the concluding statement of the phrase “opposition to protectionism.” Most participants, including China, reacted very sharply to Treasury Secretary Mnuchin’s insistence that instead of the pledge to fight protectionism, the phrase “fair and open trade” should be included in the final statement. As the chair of the meeting, Germany eventually chose not to adopt either phrase, but the final wording, “We will strive to reduce excessive global imbalances, promote greater inclusiveness and fairness and reduce inequality in our pursuit of economic growth,” was apparently in line with the U.S. view. The papers pointed out that a reference to measures against climate change was also dropped from the adopted statement, attributing its absence to the Trump administration’s doubts about global warming. The dailies said Finance Minister Aso did not express a strong opinion on the matter apparently out of deference to the Trump administration, with Asahi saying that Aso’s remarks sympathetic to Washington marked a sharp contrast with the comments criticizing the U.S. voiced by his European counterparts.

Noting that the G20 framework was elevated to the summit level in response to a proposal from the Bush administration in 2008, Asahi said the U.S. is now undermining one of the key postwar economic regimes. Yomiuri wrote that since G20 unity against protectionism is faltering, concerns are mounting over a setback in the free trade that has reinforced global economic growth over the past several decades. The paper added that many countries, including Japan, are bracing for the Trump administration’s aggressive pursuit of a protectionist trade policy in the name of “fairness.” Mainichi wrote that the G20’s viability as a bulwark for international economic coordination will be tested in the G20 summit scheduled for July in Hanover. Nikkei noted the fact that Secretary Mnuchin strongly insisted on fair trade even though trade issues are not part of his official portfolio show that the Trump administration is determined to reduce trade deficits.