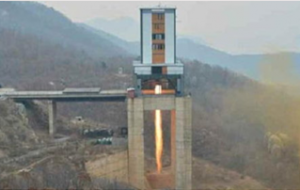 All Monday papers reported on North Korea’s announcement on Sunday that it conducted a rocket engine test, expressing concern about Pyongyang’s determination to develop a new type of engine that could be compatible with an ICBM. Asahi claimed that the Kim regime is now developing a delivery system for its nuclear weapons based on the judgment that it has already acquired a certain level of nuclear capability through multiple tests. The daily suspected that the reclusive regime is preparing to conduct another missile launch in the near future.