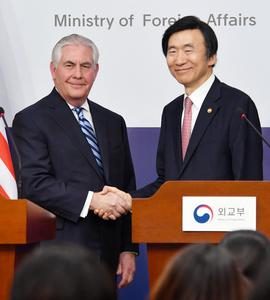 All Saturday morning papers took up Secretary of State Tillerson’s visit to South Korea on Friday, during which he made it clear that the Trump administration will no longer adhere to its predecessor’s policy of “strategic patience” toward North Korea. In his meeting with senior ROK officials, the Secretary hinted at the possibility of taking military action against the ever-growing DPRK nuclear and missile threats so as to head off additional provocations amid rising political instability in Seoul.

Sunday papers reported on the Secretary’s meeting with his Chinese counterpart Wang in Beijing on Saturday, noting that the two nations remained at odds over how to diffuse the tension caused by repeated DPRK provocations. In response to the Secretary’s call for additional efforts to enforce UN sanctions more vigorously, the top Chinese diplomat pressed the U.S. to hold direct dialogue with the Kim regime. The two sides also failed to agree on other outstanding issues, such as the THAAD deployment in South Korea and China’s militarization of the South China Sea.