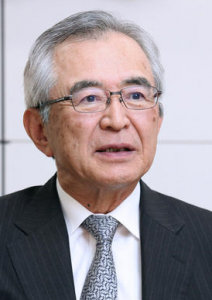 The Japanese government is asking the man behind Hitachi’s remarkable turnaround after the Lehman shock to lead daunting restructuring efforts at the Fukushima nuclear power plant operator.

As an advisory council met at the end of 2016 to discuss an overhaul at Tokyo Electric Power Holdings, officials at the Ministry of Economy, Trade and Industry were homing in on one particular member: Hitachi Chairman Emeritus Takashi Kawamura, a soft-spoken, no-nonsense executive who commands enormous respect inside Japan Inc. The hope is that Kawamura will replicate his managerial success for the struggling power provider, in which the government holds a majority stake.

Costs for the cleanup from the meltdown disaster at the Fukushima Daiichi plant were pegged at 11 trillion yen ($97.5 billion at current rates) three years ago. They now verge on 21.5 trillion yen, including the cost of reactor decommissioning and damage payments to victims. Tepco is preparing a comprehensive reform plan for release in April. The hunt for someone to lead this turnaround began early this year.

Out with the old

Tepco’s slate of outside directors — including the current board chairman, former JFE Holdings CEO Fumio Sudo — has frequently clashed with such longtime Tepco officials as President Naomi Hirose, hindering change on a number of fronts. Former Tepco executives are also said to have used strong political connections to block reforms.

The government packed the Tepco advisory council with elite managers deeply respected in political circles in preparation for a management transition. Sitting on the panel alongside Kawamura were the likes of Yoshimitsu Kobayashi, chairman of the Japan Association of Corporate Executives; Akio Mimura, chairman of the Japan Chamber of Commerce and Industry; KDDI Chairman Tadashi Onodera; and Kazuhiko Toyama, CEO of consultancy Industrial Growth Platform. “That lineup laid the groundwork” for a management overhaul at Tepco, a METI official said.

To come up with funds for the Fukushima cleanup, Tepco must reorganize and consolidate to become a global company, the group said in a report issued late last year — unfamiliar concepts for a utility long protected by a regional monopoly. It is now time to hand over authority to the next generation, the council said.

Following the report’s release, METI chief Hiroshige Seko met with one on one with committee members for advice on installing new management. Kawamura’s ample skill and enthusiasm regarding a Tepco overhaul apparently made him a front-runner for chairman, as did his extensive engineering experience and special passion for nuclear operations. His status as chairman emeritus, one step removed from day-to-day management, is thought to have made him more approachable.

“If he’ll accept, he would be the best choice,” the JCCI’s Mimura said of Kawamura in a news conference Friday.

Kawamura himself is said to have responded positively to Tokyo’s overtures. But much else about the new regime remains up in the air, not least what happens to Hirose. “There are still many things we need to do,” the president told a news conference Friday. “We need someone at the helm who can pull [the company] forward, and I believe that must be me.”

Whoever takes charge will face formidable challenges. Damages for victims of the Fukushima disaster continue to grow, and reactor-decommissioning work has yet to hit full stride. Tepco is on the hook for 15.9 trillion yen of the cleanup costs. The utility will need to improve its current, fairly brisk earnings, raising annual profit from around 400 billion yen a year to 500 billion yen, and keep up this pace for several decades.

No timeline has been set for resuming operations at the Kashiwazaki-Kariwa nuclear plant in Niigata Prefecture, a key piece of Tepco’s prospective recovery. Working with other companies to realign operations has also proved difficult. Tepco has discreetly sent representatives to such utilities as  Kansai Electric Power and Chubu Electric Power since early this year to explore selling or merging transmission and distribution operations, but to no avail. Tohoku Electric Power President Hiroya Harada has said reorganizing or merging nuclear operations with Tepco is “the furthest thing from my mind.”

Meanwhile, political pressure for reform is mounting. The government has decided to put responsibility for a portion of compensation costs on the customers of new utilities that have entered the electricity market following deregulation last year — in other words, ordinary Japanese. Tepco’s new leadership will need to move quickly to avoid adding to this burden.