TOKYO — The sun is peeking out for Japan’s agricultural sector, as some plant factory operators and corporate farms finally report profit after a rash of strategic failures and withdrawals. In many cases, dogged efforts to understand consumer demand bore fruit.

The customer’s price is always right 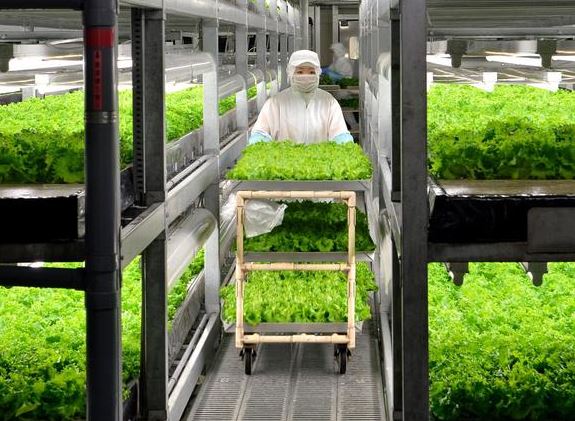 One brand of frilly lettuce, recently spotted at an Ito-Yokado in the Tokyo area, has succeeded in capturing demand among penny-pinching consumers. Its strength is in a stable price tag. When lettuce prices leaped to around 400 yen ($3.55 at current rates) per head amid poor weather last October and November, these frilly leaves held fairly steady at 200 yen.

The lettuce is grown in a factory by Kyoto startup Spread. Spread’s facility can produce 21,000 heads of lettuce per day, putting it among the world’s largest by per-plant production volume. Spread has expanded its sales network since its founding in 2006, and reached profitability in fiscal 2013.

Many businesses are getting involved with plant factories, where produce is grown with technology including light-emitting diodes, but generating profit has proven difficult.

Around 56% of such factories lost money in fiscal 2015, while 24% managed to break even, according to a survey by the Japan Greenhouse Horticulture Association. The enclosed facilities are shielded from the effects of fickle weather, but their overhead piles up, such as from electricity bills. One high-profile plant factory operator went belly up in June 2015.

Spread succeeded by starting with consumer demand and thinking back from it. CEO Shinji Inada also manages a company that works in inter-market vegetable trade, and is familiar with vegetable distribution and supermarket operations. “I first tried to think how much a head of lettuce would fetch at stores and then mapped out investment and cultivation plans,” said Inada.

First, Spread envisioned a price of around 200 yen. It then broke the break-even production point of 18,000 heads of lettuce per day, through trial and error in managing its temperatures and fertilizer use. Once the operations turned profitable, stable production became their strength.

A second factory slated for completion as early as this year is expected to churn out 30,000 heads of lettuce per day, which could bring down the price to 160 yen per head.

In some cases, companies start building supply chains after entering the field. Industrial gas supplier Air Water bought a tomato-growing facility in Chitose, Hokkaido, in 2009. The facility turned a profit last fiscal year, and is expected to repeat the feat this year. In 2014, Air Water acquired a nearby farm and began large-scale production of vegetables such as carrots, and it is also contracting to harvest kabocha squash in a number of areas.

Air Water understands the importance of distribution channels. It purchased fruit and vegetable processing and wholesaling companies, plus frozen vegetable and juice makers, as well as grocery chains. The company is creating a diverse range of sales channels as it expands its agricultural and food operations.

Agriculture is a tough field for businesses to break into. At least 2,000 companies have tried their hand, but on average, they cultivate an area roughly on par with individual farmers. Air Water’s tomato facility was first built nearly 20 years ago by medical equipment maker Omron, which pulled out after failing to generate profit. A second company bought the facility, then failed, before Air Water stepped in.

Agricultural policy has come under the spotlight since Shinjiro Koizumi, the son of former Prime Minister Junichiro Koizumi, was appointed the agriculture and forestry policy chief in the ruling Liberal Democratic Party. But cooperation from the private sector is critical to reviving the industry. Many businesses dive in thinking they can succeed with technological and managerial expertise from their core operations, then end up spending excessively and working less efficiently than existing farmers, or struggling to find buyers.

These companies tend to fall into the trap of thinking they can reform the industry, which they see as outdated. It behooves them to start from the consumer’s viewpoint, as in their core businesses, then put in steady effort to increase production.