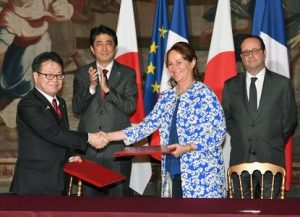 Abe and Hollande also agreed to strengthen maritime security cooperation between their nations, including the MSDF’s joint naval exercises with the French navy to be conducted in waters near Guam in late April, in which the U.S. and British navies will also participate.