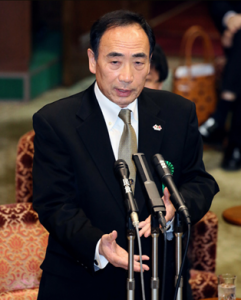 All networks reported extensively on the sworn statements made today at the parliament by Moritomo Gakuen President Kagoike, during which he revealed that Prime Minister Abe’s wife gave him a donation of 1 million yen in September 2015 on behalf of the premier for the launch of an elementary school. According to Kagoike, Mrs. Abe personally handed him the donation when she took a tour of his kindergarten. Kagoike also claimed that his wife and Mrs. Abe had been corresponding with each other online until recently, adding that the First Lady asked Mrs. Kagoike in several messages not to disclose her earlier communications with the Kagoikes.

In responding to lawmakers’ questions about the substantial discount that the school operator received when purchasing state-owned land for opening an elementary school, Kagoike said he was surprised by the scope of the discount offered by the central government. He acknowledged that there was “political involvement,” although he did not specify what he meant by that. Kagoike later mentioned the names of three Diet members from Osaka, including two LDP parliamentarians, whom he approached in the hope that they would use their political influence to help him obtain the prefectural government’s permission for opening the school.

Chief Cabinet Secretary Suga dismissed Kagoike’s remarks on the alleged donation by Abe by reiterating that neither the prime minister nor his wife gave any donations to the school operator.