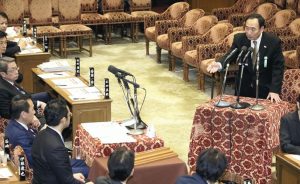 All papers reported extensively on yesterday’s sworn testimony at the parliament by Moritomo Gakuen President Kagoike regarding the substantial discount that the school operator received when purchasing state-owned land in June 2016 to open an elementary school. They highlighted Kagoike’s assertion that Prime Minister Abe’s wife Akie played a key role in his arrangements to rent the land in question in 2015, noting that her assistant from the Cabinet Office was apparently involved in communications between him and the Finance Ministry regarding the rent. Kagoike also made other “bombshell” statements about Mrs. Abe, including that she gave him a donation of 1 million yen in September 2015 on behalf of the premier and that she and his wife had been exchanging text messages with each other until recently.

The papers wrote that Abe administration officials reacted very strongly to what they called “erroneous testimony” by Kagoike, quoting Chief Cabinet Secretary Suga as telling the press on Thursday afternoon: “His Diet testimony is inconsistent with the truth.” Mrs. Abe also posted a message on her Facebook account on Thursday evening categorically dismissing the accounts by the school operator about her role in the land deal.

The dailies said, however, that the opposition bloc has stepped up its demand that Mrs. Abe be summoned to the Diet as a sworn witness to provide her own account of her relationship with the Kagoikes to continue the probe into the scandal. Pointing out that the administration and the ruling coalition originally agreed to arrange Kagoike’s Diet testimony with the goal of exposing his deceptive nature and putting the scandal to rest once and for all, the papers emphasized that this tactic has apparently backfired because the educator made one controversial remark after another and hence emboldened the opposition to increase its pressure on the Abe administration. Many Kantei officials are now worried that the prolonged scandal could put a major dent in what appeared to be a “Teflon” premiership.