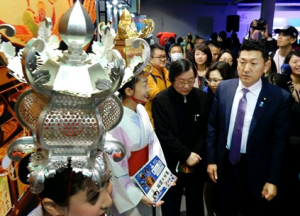 All Sunday morning papers reported that State Minister of Internal Affairs and Communications Akama visited Taiwan on Saturday to attend an opening ceremony for an event to promote Japanese culture and tourism in Taipei. The papers said Akama is the highest-level GOJ official to make an official visit to Taiwan since Japan ended its diplomatic relations with Taiwan in 1972, adding that China may react sharply to the visit.  Nikkei wrote that Akama’s visit to Taiwan is a manifestation of the Abe administration’s policy to attach importance to Taiwan. According to Nikkei, Akama told reporters after the event: “The Japan- China relationship continues to be one of the most important bilateral relationships.” He also reportedly said that Japan will maintain working relations at the private-sector level with Taiwan. Meanwhile, Nikkei said former Prime Minister Fukuda commented on Saturday on Akama’s visit to Taiwan by saying: “Chinese ships sometimes approach our territorial waters near the Senkaku Islands. We must consider whether it is good or bad to provoke each other in such a manner.”