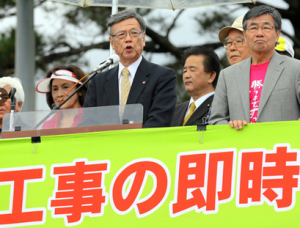 All Sunday morning papers reported that Okinawa Governor Onaga said on Saturday that he will revoke his predecessor’s approval of landfill work for the relocation of MCAS Futenma to Henoko. He reportedly made the comment while attending for the first time a protest rally held in front of Camp Schwab. Yomiuri wrote that the GOJ is planning to begin bank protection work in April and quietly move forward with the relocation plan given that Okinawa has limited means to prevent the landfill work. The paper said the GOJ is planning to continue the work without seeking an extension of a permit for destroying rock reefs that expires at the end of March, based on the judgement that another permit will not be necessary because the local fishermen have already relinquished their fishing rights in the area.

In a related story, Sankei wrote today that in the event that Onaga cancels the landfill permit, the GOJ may consider filing a lawsuit seeking compensation for financial damage caused by the delayed construction on account of “abuse of authority.” The central government may call for Onaga to pay hundreds of millions of yen using his personal funds.