There is growing concern among security experts of the possibility that Japan could trigger a race to produce the nuclear material plutonium in East Asia. The 2017 International Conference on U.S.-Japan Nuclear Cooperation Agreement and Japan’s Plutonium Policy (PuPo) was held in Tokyo on February 23 -24, co-hosted by a Japanese citizen’s group called Citizens’ Nuclear Information Centre and an American scientists’ group called the Union of Concerned Scientists. An American expert panelist pointed out the necessity to defer the resumption of operations at the Rokkasho reprocessing plant (Rokkashomura, Aomori Prefecture) that the Ministry of Economy, Trade and Industry and electrical utility industry has been working to put back online.

The safety inspections by the Nuclear Regulation Authority on the Rokkasho plant, operated by Japan Nuclear Fuel Limited (JNFL), which is funded by major power companies, are drawing to a close. JNFL aims to restart operations during the early part of fiscal 2018 after passing NRA safety checks. When that happens, as much as eight tons of plutonium could be separated each year from spent nuclear fuel collected from nuclear power plants all over Japan.

“Separating plutonium is a major security issue. China and South Korea must be concerned about Japan’s actions,” warns Georgetown University’s Robert Gallucci, former American Assistant Secretary of State for Political-Military Affairs who gave a speech at PuPo, in an interview (page 96 -97).

Professor Steve Fetter, University of Maryland’s School of Public Policy who also lectured at PuPo stresses the necessity to indefinitely postpone operations of the Rokkasho Spent Fuel Reprocessing Plant in an interview (page 98 – 99). Fetter is a national security expert who handled nuclear disarmament and non-proliferation at the White House during the Obama administration.

Japan has endeavored to set an example for the world in its handling of nuclear power, based on its principle of peaceful use. The Japanese government and Japan Nuclear Fuel Limited have boasted strict compliance in the operation of the Rokkasho plant under the rigid supervision of the International Atomic Energy Agency. However, American security experts like Fetter criticize Japan’s plutonium management policies by saying they are becoming an empty formality.

Graphs  A and B show the national stocks of separated plutonium and the growth of the global stockpile. These graphs show that while the military stockpile is reaching a ceiling, the civilian stockpile is continuing to grow.

Japan ranks fifth for the amount of stored plutonium. No other non-nuclear weapons holder owns as much as Japan.

Why does Japan, a country that has vowed not to own any nuclear weapons, have such a sizable plutonium stockpile? Because Japan’s policy defines spent nuclear fuel generated from power plants as a recyclable resources to be reprocessed instead of waste. Japan’s plutonium has been separated and extracted in the Tokai reprocessing plant or outsourced to the UK and France.

However, the fast breeder reactor development, which is viewed as the core of Japan’s nuclear fuel cycle, has come to a standstill since the government was forced to decommission Monju.

In addition, the next best option of using mixed-oxide (MOX, or pluthermal) fuel in power plants is not proceeding as hoped either. Meanwhile, Japan’s stockpile of separated plutonium has reached 48 metric tons, an amount considered to be enough for some 6,000 nuclear weapons.

Gallucci indicates in the interview that China and South Korea are concerned. As neighboring nations, they view Japan’s ability to produce plutonium as a means of nuclear armament in case protection can no longer be provided under the U.S. nuclear umbrella.

He rejects the Japanese government and power companies’ declarations that their plutonium will not be used for purposes other than peaceful use. Meanwhile, it is true that there are influential politicians that are outspoken about retaining the nuclear fuel cycle program as a nuclear deterrent. “Japan’s international pledge of no surplus plutonium has become an empty promise,” points out Fetter.

The upcoming renewal of the Japan-U.S. nuclear energy pact after its 30-year term expires in July of 2018 may have a major impact on the plutonium issue. The focus is on whether any changes will be made during the update.

The agreement could be extended automatically, without negotiations, if both signatories agree. After they do, however, the pact could be terminated with a written six-month notice filed by one of the parties. Although there is a degree of uncertainty, this treaty is thought to remain in place for the foreseeable future, so long as Japan and the U.S. remain allies.

On the other hand, both Diet and Congress approval is necessary to extend the agreement over the long term without making any changes. In either case, there is no guarantee that Japan will be given the freedom it enjoyed before to reprocess as much as it wants.

“I don’t think the U.S. Congress will keep quiet (on Japan’s current policies),”said Henry Sokolski, Executive Director of the Nonproliferation Policy Education Center (former Deputy for Nonproliferation Policy in the Office of the Secretary of Defense) and another speaker at PuPo. Sokolski indicates the possibility that the bilateral agreement renewal will be an uphill struggle for Japan, citing examples of powerful U.S. senators who are calling for the discontinuation of all East Asian commercial plutonium production. This could turn into a global issue triggered by Japan. The Japanese public needs to take more interest in the plutonium issue.

Graph A: Growth of the global stockpile of separated plutonium 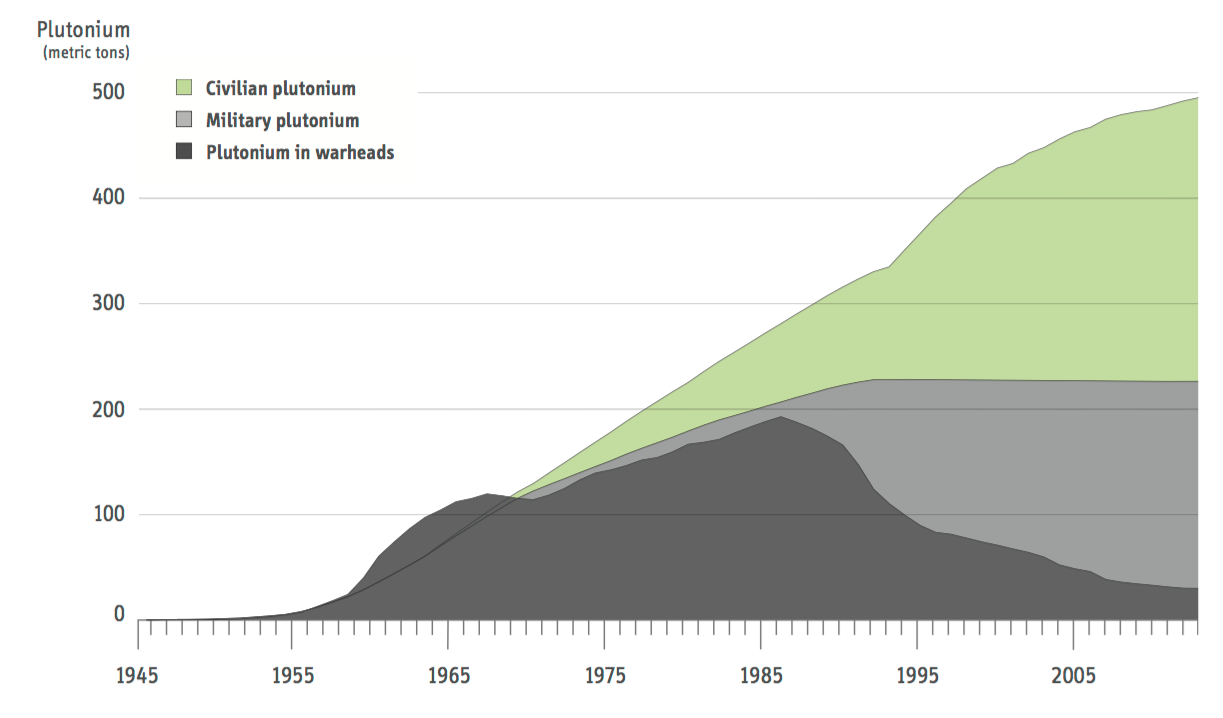 Graph B: National stocks of separated plutonium as of the end of 2014. 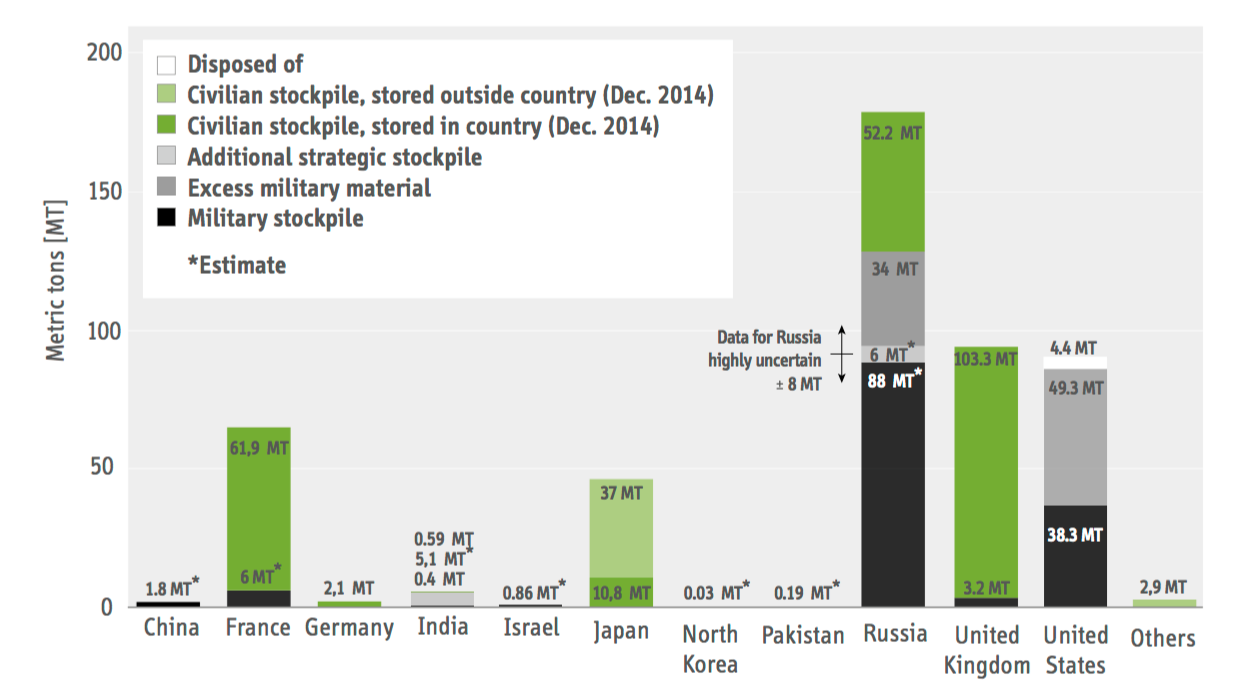