(Figures in parentheses are the results of the last survey conducted March 11–12.)

Q1: Do you support the Abe cabinet?

Q2: (Only for those who answered “yes” to the previous question) What is the primary reason for your approval of the Abe cabinet?

Q3: (Only for those who answered “no” to the first question) What is the primary reason for your disapproval of the Abe cabinet?

Q4: Which political party do you support?

Q5: In sworn testimony at the Diet, Osaka-based Moritomo Gakuen school corporation head Yasunori Kagoike said that he received a donation of 1 million yen from Prime Minister Shinzo Abe’s wife, Akie. The prime minister and others are denying the donation. Do you accept the explanations given by Prime Minister Abe and others?

Q6: It was revealed that a government official assisting the First Lady replied by facsimile to an inquiry from Kagoike regarding the purchase of state-owned land by Moritomo Gakuen. The prime minister is denying his and his wife’s involvement in the discounted sale. Are you convinced by the prime minister’s explanations? 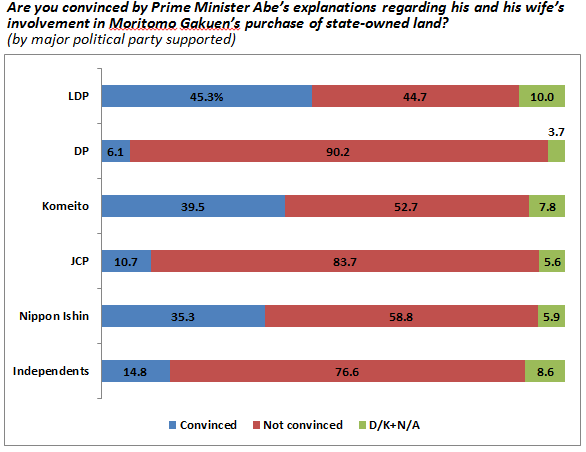 Q7: Do you think that Akie Abe should be summoned to the Diet to give an explanation?

Q8: Do you think that the government’s explanations of the sale have been sufficient?

Q9: How do you think the legal amendments to allow abdication should be handled?

Q11: The cabinet approved legislation that would amend the Act on Punishment of Organized Crimes to change the structural elements of “conspiracy” and criminalizes conspiracy even if the plans are not executed. The government seeks to have the current Diet session enact the bill. The government says the legislation is indispensable to combat terrorism while others are voicing concerns that human rights could be violated. Are you in favor of or opposed to this legislative amendment?

Q12: Do you think that Defense Minister Tomomi Inada is responsible for the handling of the daily activity logs for the Ground Self-Defense Forces (GSDF) units dispatched to South Sudan to participate in the United Nations peacekeeping operations (PKO), which the Defense Ministry said had been destroyed but the GSDF had actually retained?

Polling methodology: The survey was conducted by telephone on a computer-aided random digit dialing (RDD) basis on March 25–26 targeting voters across the nation. However, the survey excluded some areas in Fukushima Prefecture. Among randomly generated telephone numbers, those actually for household use with one or more eligible voters totaled 1,460. Valid responses were obtained from 1,018 persons.