Half of the 68 boards of education nationwide favored applicants with good English skills in the hiring process for public elementary school teachers this past academic year, according to a government survey. 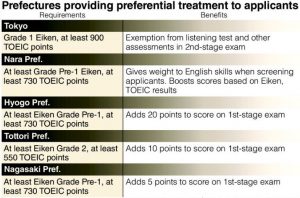 According to the Education, Culture, Sports, Science and Technology Ministry, 34 boards said they favored applicants who were proficient in English, based on results in assessments such as the Eiken English proficiency test or Test of English for International Communication (TOEIC).

The survey was conducted on 68 boards of education in the 47 prefectures, 20 major cities and Osaka Prefecture’s Toyono region, which independently recruits teachers. The survey included questions about how applicants were assessed.

Starting in the 2020 academic year, English will become a compulsory subject at elementary schools. Ahead of the introduction, competition has gradually become fierce among school boards in the search for teachers with strong abilities in English.

According to the survey, 26 boards including the Fukushima, Shizuoka, Osaka and Nagasaki prefectural boards of education said they raised scores on the first- and second-stage examinations for applicants who had achieved a certain level in the Eiken, TOEIC or other English tests.

The range of the boosted scores varied from two to 30 points depending on the boards.

Six boards, including in Tokyo and Miyazaki Prefecture, exempted applicants with proficient English ability from taking English listening tests and other kinds of assessments. Three boards, including in Aichi and Nara prefectures, offered special screening of such applicants. Nara Prefecture also adopted the added-score system in their examination.

Starting this past academic year, the Fukui Prefectural Board of Education raised scores by five to 15 points on the first- and second-stage examinations — out of 700 points in total — for applicants who had at least Grade 2 on the Eiken or at least 540 points out of the maximum 990 on the TOEIC. The board raised the scores of 53 applicants out of 411, it said.

Another board eased its conditions for a score boost, as they were too strict to attract applicants — such as a Grade 1 on the Eiken.

“It will take time to raise the level of English ability among the current crop of elementary school teachers, so we want to hire those who can be immediately effective,” a board of education official said.

Currently, fifth- and sixth-grade elementary school students do foreign language-based activities in class, such as singing and playing games, giving the children more access to English.

According to the new teaching guidelines for elementary schools for the 2020 academic year, the activities will be introduced in the third- and fourth-grades. Fifth- and sixth-graders will start learning English as a formal school subject using textbooks.

For university students who hope to become elementary school teachers, English will become a requirement on the teacher-training course starting in the 2019 academic year.

Many current elementary school teachers have not yet learned the new English teaching method.

Toward the introduction of English as a subject in elementary schools, the improvement of teachers’ ability to teach English has become an issue.

According to a ministry survey conducted in the 2015 academic year, the rate of public elementary school teachers who have taken Eiken or TOEIC tests stood at 37 percent, and the rate of those who passed at least Grade Pre-1 in Eiken was only 1 percent.

While many teachers said they were not proficient at English, some said they had started taking English lessons.

“Teachers with good English ability are in high demand, but universities that train future teachers have yet to prepare for the situation,” said Bunkyo University Prof. Masaaki Hayo. “Boards of education should make efforts to improve the quality of current teachers by providing them with training in cooperation with universities, not simply looking for personnel who are proficient English speakers.”