According to the Nikkei Inc./TV Tokyo public opinion poll conducted on March 24–26, the cabinet’s approval rating is 62%, remaining essentially unchanged from a late-February reading of 60%. The disapproval rating held steady at 30%. As for the sale of state-owned land to Moritomo Gakuen school corporation, 74% of respondents to the new poll said they are not satisfied with the government’s explanations so far, against the 15% who said they are.

Recent weeks have seen the previously obscure land transaction thrust into the national debate. Moritomo Gakuen was sold a plot of government land for a price far below its assessed value. This has raised suspicions of political pressure behind the sale. Yasunori Kagoike, the group’s outgoing chief, testified under oath at the Diet on March 23 that he received 1 million yen from the prime minister’s wife, Akie. The prime minister has denied this claim.

Dissatisfaction with the explanations reached as high as 95% among respondents who did not approve of the cabinet and a still-high 65% among those who did.

The survey was conducted on March 24–26 by Nikkei Research Inc. via random-digit dialing to both landlines and mobile phones. It drew 943 responses from people aged 18 and older nationwide, for a response rate of 43.9%. 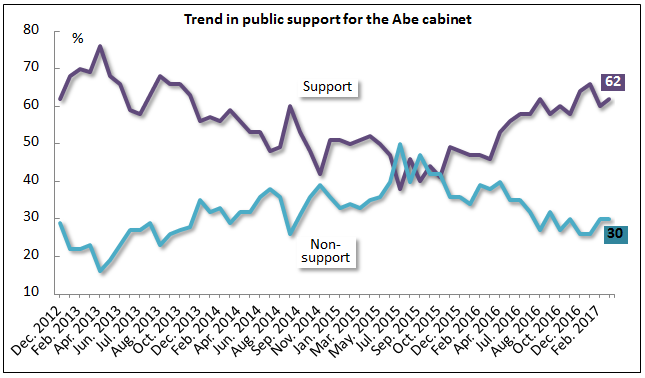