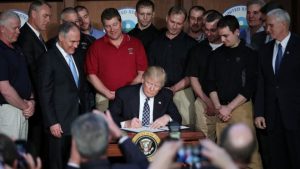 All papers reported on an executive order signed by President Trump on Tuesday to drastically review the measures against climate change that were established by former President Obama. Asahi wrote that although President Trump did not specify whether the U.S. will withdraw from the Paris Agreement, it will be almost impossible for the U.S. to achieve its emission reduction goal pledged under the agreement. Mainichi wrote that the United States’ has virtually withdrawn from the Paris accord and that the agreement will be watered down by the policy change in the U.S. as the world’s second largest emitter of greenhouse gases after China. The paper also wrote that the executive order made it clear that the Trump administration attaches importance to its “America First” policy over international cooperation. Asahi quoted Environment Minister Yamamoto as saying at a news conference on Wednesday that Japan should not be influenced by changes in U.S. policy.