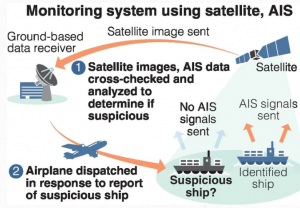 The government has started studying the use of satellites to monitor suspicious ships that could be illegally operating in waters near Japan, The Yomiuri Shimbun has learned.

The Strategic Headquarters for Space Development, which is led by Prime Minister Shinzo Abe, began basic research for the study in February. It examined geographic conditions such as harbors, remote islands and straits, as well as possible changes in the accuracy of satellite observation due to climate factors.

The headquarters is also studying other issues, including the number of satellites needed for practical use. It will coordinate with the Headquarters for Ocean Policy to pinpoint tasks, including ways to consolidate information obtained by satellites, in advance of concrete discussions on practical use to be held in the next fiscal year or later.

To detect suspicious ships, the government will utilize an automatic identification system (AIS; see below), which vessels in the 300-ton or larger class are obliged to install. AIS signals sent from ships, and also images of their trails photographed by satellites, will be cross-checked to isolate suspicious vessels from which no AIS signal was sent.

A series of illegal operations by Chinese fishing boats has been reported in waters around the Senkaku Islands in Okinawa Prefecture and other areas. There are concerns that armed fishermen may attack Japan’s remote islands. Given the circumstances, the government stipulated a policy for using satellite information to ensure marine security and safety in the Basic Plan on Ocean Policy, which was approved by the Cabinet in 2013.

A JCG official said, “We would deal with any situation swiftly if we could monitor areas around the clock from space.”

Western countries are leading the way in satellite systems for monitoring suspicious ships. Canada dispatches airplanes to sites to determine if a vessel is suspicious based on data gathered by satellites.

Automatically sends and receives information such as vessel name, destination and purpose of navigation. AIS signals can be received by JCG facilities and some satellites to prevent accidents. An obligation to install AIS is stipulated in the laws of each relevant country, based on the International Convention for the Safety of Life at Sea that was ratified by 163 countries, including China and North Korea.