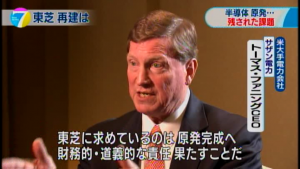 NHK’s “News 7” aired a taped interview with Southern Company CEO Thomas Fanning concerning Westinghouse’s recent filing for Chapter 11 bankruptcy protection. Southern Company has a contract with Westinghouse for the construction of two nuclear reactors. Fanning said that he is visiting Tokyo this week to discuss with the CEO of Toshiba how to complete the project. He expressed hope that Toshiba will fulfill its financial and moral commitment to complete the construction of the reactors. The businessman added that Westinghouse has an important role to play not only in energy infrastructure but also in national defense, and that nuclear energy should be promoted from the economic, energy, and national security standpoints.