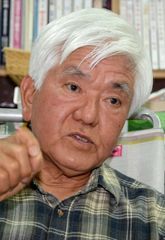 Ryukyu Shimpo ran an interview with Katsuhiro Yoshida, who assumed the post of policy coordinator in charge of base issues at the Okinawa Prefectural Government on April 1. Yoshida told the paper that he is determined to remove the Futenma functions from Okinawa, prevent a new base from being constructed at Henoko, remove the MV-22 Ospreys from Okinawa, and  seek revisions to the SOFA. The new policy coordinator stated: “The security arrangements between the U.S. and Japan will be undermined if too much pressure is put on Okinawa. A new campaign against Kadena AB might be launched. Okinawa may have to do something that will make the U.S. military feel afraid. We need to tell the people of the U.S. and all over Japan that we are angry.” He went on to say: “The idea of the governor visiting the U.S. is fine. But it is also important to invite journalists from major international news organizations to visit Okinawa and see the situation in Okinawa firsthand. I would also like to urge the ambassadors at foreign embassies in Tokyo to come and see the situation in Okinawa.” In a separate interview with Okinawa Times, Yoshida expressed readiness to hold patient discussions with the GOJ, the U.S. military, and local governments to deliver on Governor Onaga’s campaign pledge to prevent the base construction at Henoko.