Anti-U.S. base activist lashes out at tactics used in Okinawa 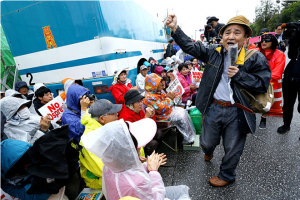 A prominent anti-U.S. base activist recently released after five months in custody accused authorities of strong-arm tactics to suppress freedom of expression.

“I felt that long-term detention was meant to intimidate Okinawans,” said Hiroji Yamashiro, chairman the Okinawa Peace Movement Center, in a recent interview with The Asahi Shimbun.

The southernmost prefecture hosts 70.6 percent of all U.S. military installations in Japan.

Yamashiro, 64, was arrested late last year on suspicion of causing injuries during a protest, along with forcible obstruction of business. He faces two other counts and is now on trial.

His release on March 18, with bail set at 7 million yen ($63,000), came after a group of 41 academics specializing in criminal law issued a statement calling for his early delivery from confinement on grounds his detention was “baseless.”

Amnesty International Japan added its voice to the criticism of long-term detention in January.

Yamashiro was first arrested last October on suspicion of causing damage to property by cutting barbed wire near a construction site for a U.S. military helipad in the vicinity of the Takae district of Higashi, a village in the north of the prefecture. The wire was strung around the site by the Defense Ministry’s Okinawa branch.

“I will fully testify during my trial, but I just cut a piece of wire that had hooked barbed wire on a tree branch,” he said. “I simply could not believe at that time that I would be detained for days for such a trivial matter.”

Three days later, the Naha Summary Court dismissed a request for further detention. But that same day, police rearrested him on suspicion of causing injuries to a Defense Ministry employee, accusing him of using excessive force when he grabbed the individual by the arm during a protest. He also faced other accusations.

Yamashiro was arrested yet again Nov. 29.

He admitted to causing criminal damage, but remained silent on other issues during questioning.

“Increasingly, people are being arrested because police are getting more aggressive and, to top it all, claiming that suspects ‘conspired,’” he said.

Yamashiro said he sensed that police may have felt emboldened by proposed legislation to make conspiracy a criminal offense.

“I was so terrified that I could not speak (during questioning),” he said.

During his first two months and half of detention, Yamashiro said police interrogated him every day.

“They repeatedly asked me, ‘Will you stop going to Henoko?’” he said, referring to the district in the city of Nago where anti-U.S. military demonstrators were congregating.

A Japanese government project is under way off Henoko to build a new base to take over the functions of the U.S. Marine Corps Air Station Futenma in Ginowan, also in Okinawa, based on a bilateral agreement.

“I was under tremendous pressure, but staging a sit-in is demonstrating my position,” he said. “It was out of question for me to say that I will never go.”

Yamashiro hails from what is now Uruma city in the south of Okinawa’s main island.

He grew up listening to tales of the bloody 1945 Battle of Okinawa that his father often recounted. Okinawa has served as the main U.S. military bulkhead in Japan ever since. Crimes by U.S. military personnel remain a festering sore.

Residents opposed to the Futenma relocation began staging daily sit-ins in front of the U.S. military’s Camp Schwab in July 2014 before the government began a drilling survey. Camp Schwab is in the vicinity of the site where a new airfield will be constructed to relocate the Futenma base.

The civil demonstrations reached the 1,000th milestone on April 1.

The gatherings have also drawn criticism. Some claim online that demonstrators “are paid to assemble” or “most of the demonstrators are from outside Okinawa Prefecture.” Others brand them a “violent mob.”

But Yamashiro refutes the accusations.

“We don’t have any money at all,” he said. “It is true that people from outside Okinawa, as well as foreigners, have joined us occasionally. But the protests would not have lasted this long without the participation by ordinary Okinawans. The 1,000 days of demonstrations attest to the fact that the remarks swirling on the Internet are all lies.”

During demonstrations, riot police are brought in to remove protesters. One time, Yamashiro laid bricks to prevent officers from clearing protesters, which led to his indictment for forcible obstruction of business.

“I could not bear what I saw, with more than 100 riot police and people screaming,” he said.

Yamashiro has harsh words for the authorities. He says they are wholly to blame for injuries suffered by protesters, many of whom were rushed to hospitals in ambulances for treatment.

Yamashiro has a question for people on Japan’s mainland.

“Is it unacceptable to lay my own life on the line for opposing construction of a U.S. military base?” he asked. “If sentiment against such behavior is spreading on the mainland, I wonder who are senseless, we Okinawans or people on the mainland.”