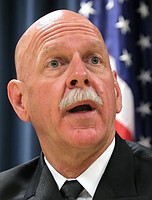 Jiji Press reported on a briefing to a group of journalists in Tokyo on Thursday by Pacific Fleet Commander Admiral Swift, quoting him as saying that the U.S. and Japanese forces would be able to make adjustments if the Japanese government chose to acquire the capability to attack enemy bases. He was also quoted as saying that he would not be surprised if some people in Japan were discussing what kind of options Japan should obtain other than the existing defense measures and that he would not also be surprised if the discussion on the matter were to mature going forward in view of the clear and present threat posed by North Korea’s missile launches. Concerning how to deal with the DPRK’s nuclear and missile development, Admiral Swift reportedly commented that it is important to discuss the issue from the viewpoint of the entire government, not only from a military point of view. He added, however, that there have always been military options.

Nikkei also reported Admiral Swift’s remarks on the idea of Japan acquiring the capability to conduct preemptive strikes against enemy bases. The paper quoted the admiral as saying that North Korea poses a clear and present threat and he would not be surprised if Japan were to consider alternatives to the current measures that have apparently been unsuccessful in deterring North Korea.