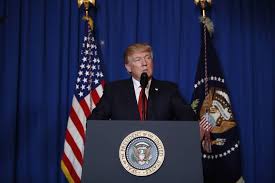 All networks carried extensive reports that the U.S. fired 59 Tomahawk cruise missiles at an airfield in Syria on Thursday, only two days after Syria allegedly launched a chemical weapons attack against its own citizens. NHK and TBS said it was the first direct American assault on the Syrian government since the country’s civil war began. The networks quoted President Trump as saying at a press conference: “On Tuesday, Syrian dictator, Bashar-al-Assad, launched a horrible chemical weapons attack on innocent civilians. Using a deadly nerve agent, Assad choked out the lives of helpless men, women, and children. It was a slow and brutal death for so many. Even beautiful babies were cruelly murdered in this very barbaric attack. No child of God should ever suffer such horror. Tonight I ordered a targeted military strike on the airfield in Syria from where the chemical attack was launched.”

An NHK reporter said President Trump’s aim was to send a strong message to the Assad regime and the entire world that the U.S. will not rule out use of military force in response to unforgivable acts. Noting that the President said just yesterday that Syria had crossed a “red line,” the reporter said the President wanted to maximize the impact of the military strike by taking action immediately after his remarks without giving Syria time to prepare for the attack. Noting that a U.S.-China summit is currently being held in the U.S., another NHK reporter said that the strike on Syria sent a strong message to North Korea as well. Meanwhile, a TBS reporter said that the U.S. attack on the Assad regime, which is backed by Russia, could add further confusion to the current situation in Syria, adding that attention will be focused on how the U.S. and Russia will respond to the situation.