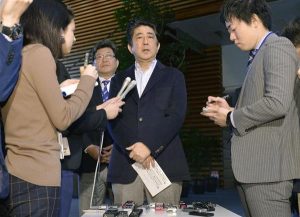 NHK reported on Sunday that President Trump and Prime Minister Abe held a 45-minute teleconference on Sunday morning, during which the premier expressed support for the U.S. resolve to fulfill its obligation to prevent the use of chemical weapons and approval of the President’s strong commitment to the peace and security of U.S. allies and the world. The network said the telephone conversation was held at the request of the U.S. side. The premier told reporters after the call that the two leaders agreed that it is important for the U.S. and Japan to work together closely on North Korea and for the U.S., Japan, and South Korea to unite.