Starting this month, Saitama University’s Social Survey Research Center will post on its website a graph of the averages of the cabinet support rates found in the nationwide public opinion polls conducted by [six] media outlets.

The figures are calculated based on the results of the telephone-based public opinion polls conducted by the following six news outlets: the Mainichi, Asahi, Yomiuri, and Nikkei newspapers as well as NHK and Kyodo News. Average figures are calculated for each month from January 2017 and plotted in a line graph to track trends in the cabinet support rate. Since January, the average support rates have been 58% [Jan.], 59% [Feb.], and 54% [March] while the average nonsupport rates have been 28%, 26%, and 31%.

Because polling methodology differs by news outlet, no simple comparison can be made of the poll figures. The center aims to analyze trends in the average of the figures on a continuous basis and have the average figures take root as a new index for measuring overall trends in the cabinet support rate.

Professor Masao Matsumoto, head of the Social Survey Research Center, says, “I would like to increase society’s awareness that the results of media outlets’ opinion polls are the most objective indices of public opinion.”

The center was established in 2009. Since 2013, the center has jointly conducted with the Mainichi Shimbun the Survey of Public Opinion in Japan, an annual mail-in public opinion survey on current issues. 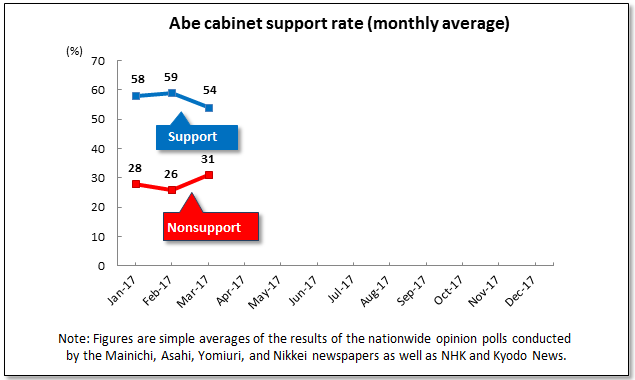