According to the opinion poll jointly conducted by the Sankei Shimbun and Fuji News Network (FNN) on April 15–16, some 91.3% of pollees reported feeling that the DPRK’s nuclear and missile development is a threat, while 8.0% said they do not see the country that way.

Pollees were asked for their precise views on Japan’s possessing the “capability to attack DPRK bases” in response to the launch of a ballistic missile by that country. Some 45.0% said “Japan’s capability to attack DPRK bases should be limited to counterattacks after a ballistic missile targeting Japan has been launched.” Meanwhile 30.7% approved of “preemptive attacks,” saying, “Japan should attack DPRK bases at the stage that the DPRK has made tangible preparations to launch a missile toward Japan.” In total, therefore, over 75% of pollees approved of attacking DPRK bases.

Some 19.2% were opposed, saying, “Japan should not counterattack DPRK bases even if a ballistic missile targeting Japan is launched.”

In the previous poll (conducted on March 18–19), some 75.1% of pollees said either “Japan should possess the capability to attack DPRK bases” or “Japan should consider possessing such capability.”

At the end of March, the Liberal Democratic Party (LDP) asked the government to consider having Japan possess the “capability to launch counterattacks against DPRK bases” to prevent the firing of additional missiles in the event that the DPRK launches a ballistic missile toward Japan. In the recent poll, 47.1% of LDP supporters responded that they are in favor of this, and 35.3% [of LDP supporters] said that they approve of preemptive strikes.

By age group, 54.8% of men in their fifties thought that “Japan’s capability to attack DPRK bases should be limited to counterattacks after a ballistic missile targeting Japan has been launched.” Next were women in their sixties or over at 51.1%. Women and men in their thirties were the most approving of “Japan’s attacking DPRK bases at the stage that the DPRK has made tangible preparations to launch a missile toward the nation,” at 38.9% and 38.7%, respectively.

[Polling methodology: The survey was conducted until the calculated number of responses was obtained by placing telephone calls on a random digit dialing (RDD) basis adjusted to the gender and age composition of each survey area. A total of 1,000 men and women, aged 18 and over, across the nation were surveyed. The survey was conducted on April 15–16, 2017.] 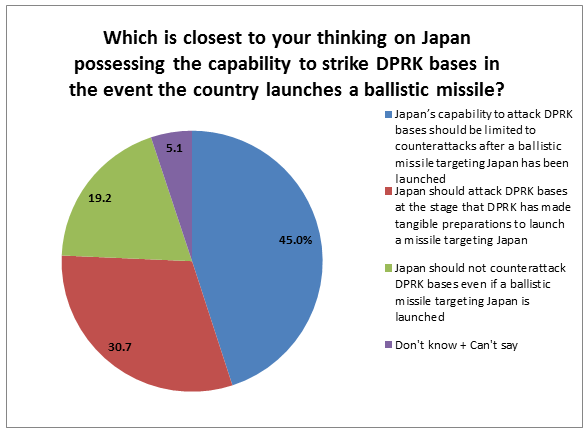