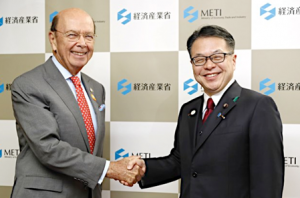 All Tuesday evening papers ran reports on a meeting between Secretary of Commerce Ross and Economy and Trade Minister Seko that was held earlier in the day in Tokyo. Seko told reporters after the meeting that he held candid discussions with the secretary and that in addition to trade in Asia, the two officials discussed such issues as cybersecurity and infrastructure development as areas for bilateral cooperation. Mainichi wrote that concerning the possibility of a bilateral FTA with Japan, the secretary stated that it is too early to discuss the issue and that Washington is hoping to strengthen its trade relations with Tokyo. However, Asahi and Nikkei wrote that the secretary expressed Washington’s desire to seek a bilateral trade agreement with Tokyo. Yomiuri wrote that the U.S. and Japan plan to move forward with discussions on specific issues at talks between the Commerce Department and the Ministry of Economy, Trade and Industry. Nikkei wrote that Japan tried to keep the talks between Secretary Ross and Minister Seko separate from the U.S.-Japan Economic Dialogue in order to prevent the dialogue from focusing on trade issues.