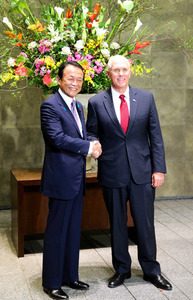 All papers front-paged the inaugural meeting of the U.S.-Japan Economic Dialogue that was co-chaired by Vice President Pence and Deputy Prime Minister Aso in Tokyo on Tuesday. The two nations agreed to pursue the dialogue by focusing on three things — trade and investment strategy, cooperation in economic and structural policies, and sectoral cooperation. The U.S. and Japan also agreed that the dialogue should generate concrete results in the near term. The papers wrote that the Vice President stressed during a post-meeting joint press conference that the TPP is an idea of the past and that the U.S. will seek bilateral trade negotiations. However, Aso stated that it is important to establish trade rules for the Asia-Pacific region under the leadership of the U.S. and Japan.

Asahi wrote that the Vice President expressed the Trump administration’s intention to seek bilateral negotiations on an FTA with Japan through the dialogue. The paper speculated that the U.S. may increase pressure on Japan to further open its farm and auto markets following Vice President Pence’s clear statement as a key member of the Trump administration on Washington’s desire to hold bilateral trade talks with Tokyo.

Mainichi also wrote that the Vice President expressed the Trump administration’s strong desire to forge a bilateral trade agreement with Tokyo, quoting the Vice President as saying at the joint press conference that the U.S. will seek balanced bilateral trade relations with Japan and that it is necessary to remove trade barriers and allow U.S. exporters high-level access to Japanese markets. The paper wrote that the differences between the U.S. and Japan were made clear through the first round of economic dialogue. Washington plans to urge Japan to hold bilateral trade negotiations, while Tokyo gives priority to the establishment of a multilateral trade framework like the TPP.

Yomiuri wrote that although the first round of dialogue ended without creating a major stir because the U.S. was unable to prepare for it sufficiently due to a delay in filling key trade-related positions, Washington may place tough demands on Tokyo in the future after it finalizes the lineup of key trade officials.

Nikkei wrote that the U.S. and Japan failed to hold in-depth talks on infrastructure and energy development at the dialogue and that the issue of currency was not taken up. The paper wrote that attention will be focused on whether Japan will be able to conduct detailed discussions on economic cooperation while deflecting the U.S. pressure on trade and currency. The paper wrote that the gap over trade negotiations may become a source of friction between Washington and Tokyo because Japan is considering a TPP agreement without the U.S.